‘GoaMiles is here because of taxi owners mistakes’ 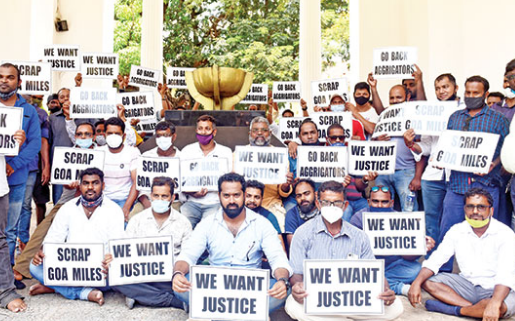 Tourism Minister Manohar Ajgaonkar responded to the charges put against him by the protesting taxi owners, who have accused him of supporting non-Goans in the taxi business at the expense of Goans who have been in the business for decades.

“Yes I am the one who brought in GoaMiles. But if the local taxi owners had to put meters, there would not have been a situation where there was a need for GoaMiles to enter. Because they did not listen, GoaMiles is here because of the mistakes they made,” Ajgaonkar said.

He emphasised that he is not against local taxi owners and drivers as has been alleged by them.

“I am with them. They are my brothers. I am saying there are a few people in the taxi business who have spoiled the name of Goa not just in the country but also in the world by charging exorbitant fares without installing meters,” he added.

He added that the problems would be solved if the taxi owner put up fixed rates at reasonable charges like a trip from Dabolim airport to Calangute beach.  He said if this is done then there would be no objections and that this way their business would be ‘proper’ and then people would be happy too.

Asked why he had not taken action in this regard or addressed the grievances of the local taxi drivers, Ajgaonkar said that the Transport Department and Minister has to take a decision regarding their demands.