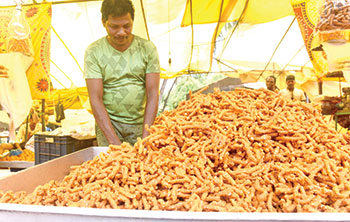 The State government is now in the process of filing applications with GI Registry, Chennai to obtain GI tags for more products like famous fish curry rice, cashew nuts, ‘Mankurad Mango’, Goan ‘Bebinca’- a sweet dish with several layers, ‘Khatkhatem’- dish made up of various local veggies and the ‘Taleigao Brinjal’.

All Goa Khaje Producers Association who received it on July 30 had made the application earlier.

The notification states that one of the common and popular snacks piled high on top of each other during the feast and zatra is Goan khaje and that it is found in almost all the religious functions in temples and churches.

It also said that Goan ginger, salt and potable well water gives a unique taste to the dish. “Eaten as a snack or dessert, this sweet is nostalgic and enjoyed by all,” the notification mentioned.

The Myndoli Banana, also known as Moira Banana, an important fruit crop, grown in the villages of Pernem, Bicholim and Bardez taluka, obtained GI tag on June 30 under Class-31.

Myndoli Banana Growers Association had made an application on December 13, 2019.

It is believed that the name Mynodli Banana is named after Moira, a village in Bardez taluka, as it is known as the first fruit to exist, or be introduced in the village.

“It is an important fruit crop of Goa. It is the most popular and tasty banana as compared to other varieties. It is very nutritious. It is high in vitamins and minerals. Many health problems can be avoided by regularly consuming Myndoli banana. It has good nutritional and medical value,” the notification stated.

On May 29, the Harmal Chilli, the most important spice crop of Goa, obtained GI tag. The Harmal-Pernem Chilli Growers Association had made the application for the same on January 14, 2019.

The chillies are reddish-brownish in colour with short length. It has a good keeping shelf life and can be stored for loner duration.

“The Harmal Chilli is considered to be famous amongst other chillies available in Goa due to its important qualities. It contains rich minerals such as iron, manganese and copper,” the notification said.