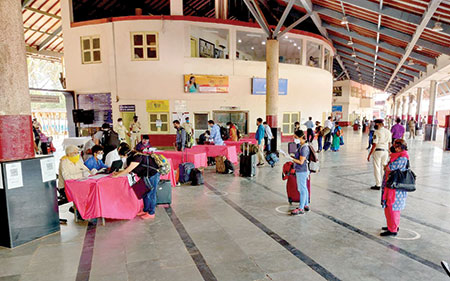 MARGAO: A total of 278 passengers disembarked at Margao Railway Station from two separate trains on Saturday.

The Delhi train arrived with 252 passengers at Margao while the one from Thiruvananthapuram came with 26 people.

Offices of the Collector and Mamlatdar along with the health officials on Saturday hosted the operation to disembark the passengers at Margao Railway Station.

According to the new standard operating procedures (SOPs), passengers were taken to testing facilities.

The District Administration has taken special care while disembarking the passengers from the trains. The passengers have been disembarked and taken to the District Hospital for swab testing.

"Separate buses have been designated according to the new SOPs. Even if one passenger is found positive, the passengers of that coach will be separately quarantined," informed mamlatdar Shankar Gaonkar.

"Attention has been given at micro level by the administration to make sure there is no mixing of passengers," Gaonkar added.

Meanwhile, 174 passengers left for Delhi from Margao on Saturday.