PANJIM: In the last ten days there have been 5,487 cases with a daily average of 548.7 cases. On Thursday, June 10, the COVID daily positive rate dropped down to 12.52%, which is comparatively lower to the high peaks of April and May. 413 new cases were reported while 3298 samples were tested.

13 deaths were reported on Thursday wherein only 11 took place within 24 hours of Thursday evening while two others took place on June 7.

When it comes to the number of deaths in the last ten days, while 168 deaths have been reported with an average of 16.8 per day, there were also 5 additional deaths reported late between the period of May 26, 2021 and June 5.

It is to be noted that another 70 deaths were also reported late between August 2020 and May 2, by private hospitals.

For perspective, in the month of May, an average of 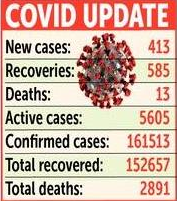 346 persons were placed under home isolation while 67 new patients were hospitalised and 86 persons were discharged from various hospitals.

585 persons recovered within the last 24 hours of Thursday evening and the recovery rate is now at 94.73%.

Two of these deceased persons had no comorbid conditions.

Meanwhile, the Directorate of Health Services (DHS) added that one additional death dated June 4, 2021, has been added to the cumulative deaths and that it was reported late from a private physician in Curtorim.