61 DAMS set to come up in Goa’s MHADEI basin

PANJIM: The Mhadei River basin is on course to have 61 dams, which will be spread across four talukas of Goa, as the State government plans to complete the comprehensive project of water conservation, approved in 1998.

After being allocated a quantum of water by the Mhadei Water Disputes Tribunal (MWDT) in 2018, the government recently resumed the process to complete the long-pending projects.

In August 2018, the Tribunal, hearing the tussle over sharing of the Mhadei water between Goa, Karnataka and Maharashtra allowed the water share of Goa pegged at 24 TMC for municipal water needs, irrigation water requirements and industrial water demands. Karnataka was allocated 13.42 TMC and Maharashtra got the lowest share of 1.33 TMC to meet its in-basin needs with respect to five projects.

Following that the Goa government has taken up the task of building dams across the basin. The map alongside shows where the dams will be located in the basin. Herald has credible information that survey investigations and contour survey of 10 projects are underway since March this year.

Of these, Kajumol and Tatodi in Dharbandora taluka are being taken up on priority. “Experts of Water Resources and Forest Departments have been on the job since March, including the period when the nation was observing lockdown due to the COVID-19 pandemic,” a source in the Water Resources Department said.

As all the 61 projects are mentioned in the Master Plan 1999, as per government records, the authorities are ensuring speedy work, even as the tussle with Karnataka over the water sharing and diversion of water continues. 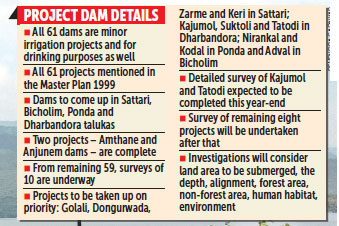 “All 61 dams are minor irrigation projects and for drinking purposes as well. Two projects which are Amthane and Anjunem dams are already complete and from the remaining 59, surveys of 10 are underway and the remaining will be subsequently taken up,” a source in the government said.

A detailed survey of Kajumol and Tatodi is expected to be completed by the year-end, after which a survey of the remaining eight projects will be undertaken.

When questions were raised on the human habitat, forest cover, etc, the source said that the investigations will also take into consideration the environment. “The total land area to be submerged, the depth, alignment, what would be the forest area where the project is coming up, the non-forest area, human habitat, environment, every aspect will be taken care of,” the source revealed, adding, “In the Master Plan of Goa, they have identified some projects. The experts will look for other catchments, so that there is no overlapping. The locations will not be close to each other and as such, the projects are identified in such a way that sufficient catchment is coming for one project and we have a plan for another dam.”

During the hearing on the water diversion between the three States in 2018, an expert witness had in his oral submission to the Tribunal claimed that the demand of Goa goes well beyond the DPRs of 61 projects envisaged in the Master Plan.

“The State of Goa intends to meet the demand for major uses through the 61 projects identified by the panel of experts. In case of some of the demands, it is not possible to prepare the DPRs, such as environment demands, tourism demands etc and that attempts are being made to identify more projects, especially like abandoned mining pits, construction of bandharas, etc for fulfilling the demands,” the witness had deposed. 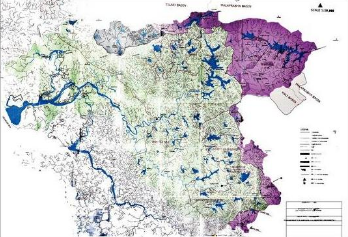