800 seafarers to arrive on June 5 at MPT 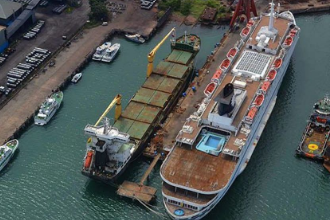 PANJIM: Around 800 seafarers will arrive at Mormugao Port Trust (MPT) on June 5, Chief Minister Dr Pramod Sawant announced on Tuesday. The Chief Minister said this during an hour-long interaction with the people of the State that was held on social media.

Replying to a question on seafarers, Sawant said the State was concerned about them and hence has been interacting with Central agencies in this regard. “We have been successful in bringing the seafarers from Marella Discovery, besides the Angriya crew has already come yesterday and have been quarantined in a hotel,” he said.

The Chief Minister said that in the next few days a few cruise ships are scheduled to come directly to MPT. “On June 5, Carnival is coming to Goa with 800 crew members. The Karnika cruise will come in the next two days,” he said.

About Goans stranded abroad who have no direct flights to Goa, he said they need not worry as arrangements are being made for them. “The repatriation flights have commenced, but there are no direct flights to Goa and also not many Goans are getting tickets to nearby airports as the Indian Embassy in that country decides the priority to grant tickets,” he said.

He said the State government has forwarded a list of 3,000 registered persons to the Centre. “We understand all the issues, but Goans need not worry as in the next few days direct flights to Goa will also resume,” he stated.

On criticism the government is receiving due to the resumption of direct trains from Delhi, the Chief Minister said the State has little role as the Centre takes this decision. “We also have to understand people are distressed all over the country and they have to be taken to their destinations and hence the Centre has decided on starting trains,” he said.

On questions of when bars, gyms and restaurants will start operations, he said, the decision will be taken in the next few days. “The associations have met me and I have assured them that a positive decision will come after May 17 when Lockdown 3.0 ends. It also depends on what the PM says in his address today,” he said.

He stated further that the PM assured on Monday that the State will have rights to give some relaxations. “We will consider everyone’s view and we will take a positive decision,” he said.

Sawant further urged Goans to become self-reliant and not depend for everything on the neighbouring States. “Corona has taught us a lesson to become self reliant,” he said.

CM SPEAK
ON TRAIN SERVICES
- State has little role as Centre takes this decision
- 400 people have booked tickets to Goa in first train
- Will keep passengers in a stadium and test them
ON GOANS STRANDED ABROAD
- Arrangements being made for them
- Not many Goans getting tickets as Indian Embassy decides priority
- Government has forwarded list of 3,000 registered persons to Centre
- In next few days direct flights to Goa will resume
ON OPENING OF BARS, RESTAURANTS
- Decision to be taken in the next few days
Related news