A BRIDGE TOO FAR: Goa is sitting on a 3 to 4-year delay of the new Zuari Bridge opening

None of the three phases of the bridge were even close to meeting their deadlines; a VVIP inauguration has been announced in December but there are still some pretty loose ends to be tied up 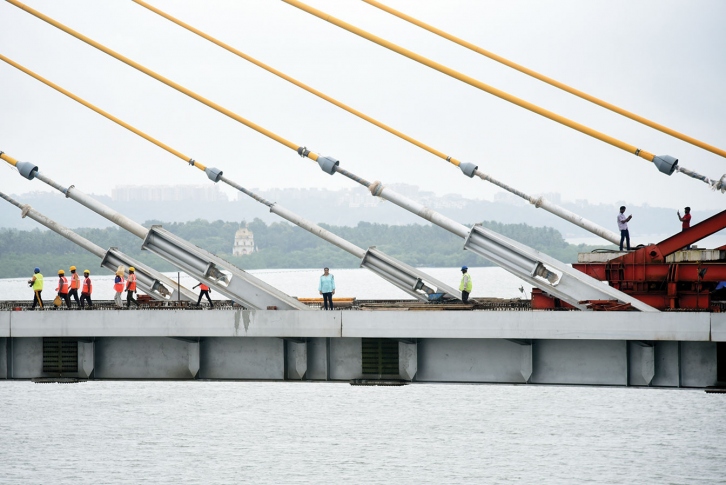 PANJIM: Even as the opening of the main stretch of the Zuari Bridge has been announced, for Goans, it’s been a case of a bridge too far. A baby born when the Zuari Bridge construction work started is six years now.

Each of the three phases is behind by 3.5 years to four years.

Imagine the man-hours lost and the escalation of costs, which calls for a separate investigation.

The construction of the eight-lane signature Zuari Bridge linking both districts is one of the major ongoing projects in the State delayed by almost three-and-half years and the government giving several deadlines to inaugurate the initial four-lane bridge.

Each of the components was delayed and was completed beyond the scheduled date while, with several PWD Ministers giving various deadlines to commission the bridge.

According to PWD Chief Engineer (National Highways, Roads and Bridges) D C Gupta, the works of the new Zuari Bridge and expansion of National Highway-66 sanctioned by the Union Ministry of Road Transport and Highways (MoRTH), New Delhi was taken up in three packages in 2016.

All three works were awarded to M/s Dilip Buildcon Limited.

The work of the package II was the construction of the eight-lane signature Zuari Bridge. Of the total 1.08-km-long bridge, 640 metres is the cable-stayed portion while, the central span is 360 metres. The length of the back spans on either side of the bridge is 140 metres each. The total cost of the project is Rs 545 crore, he said adding that the right-hand side of the bridge has been completed. The bridge will be opened for vehicular traffic next month after load testing.

The Zuari is the construction of the highway from Cortalim up to Sharayu Toyota showroom, Verna, a distance of 3.67 km. Of this, 2.98 km is elevated and 0.69 km is road at grade. The total cost of the project is Rs 418 crore and the work has been completed, according to Gupta, but the bridge is not open to the public yet

Some reasons for time delays

No Visa power: The government had to replace the designer of the bridge from China, due to Visa problems and time consuming. The launching of the girder and stressing of cables were sent to the designer through video recordings/internet and once he approved, further work was taken up. This was found to time-consuming and caused delay prompting the government to change the designer in June last year.

The “virus’ of delay Gupta said that works of Zuari package-I and package-III were started in June 2016 and were to be completed in 30 months. Similarly, the work of package II (main Zuari Bridge) was started in April 2016 and was to be completed within three years. But all the works were delayed due to land acquisition proceedings, the Covid-19 pandemic, and replacing of the bridge designer from China.

September 28, 2020: Deepak Pauskar said that the new bridge work will be completed by April 2021

July 4, 2022: PWD Minister Nilesh Cabral said that one four-lane section of the new Zuari Bridge will be opened for public vehicular movement in September 2022

July 15, 2022: PWD Minister Nilesh Cabral stated in the Legislative Assembly that one four-lane section of the new Zuari Bridge will be ready for use by December 2022

Work started on June 8, 2016 and was to be completed within two-and-half-years i.e. December 2018. deadlines were extended many times till it was completed in March 2022. The new highway has been opened for traffic up to Agasaim

‘Completed’ but the load was not tested. Can open post that

Work on the main bridge started on April 11, 2016, and the work of the four-lane bridge was to be completed within a period of three years i.e. by April 2019. But the work has been delayed by three-and-a-half years. It has now been completed and awaiting load testing which will be carried out any time after November 25

The bridge is likely to be inaugurated in December 2022.

Work started on June 8, 2016, and was to be completed by December 2018. But it was delayed and deadlines were extended several times. The work is now completed but was not opened for vehicular traffic due to the non-completion of the main bridge work.