Forest guard posted at the turtle nesting site at Morjim charged money from Delhi tourists for providing the “release date and time” over the phone; Instagram crazy tourists keener on photos than the safety of newborn Olive Ridleys 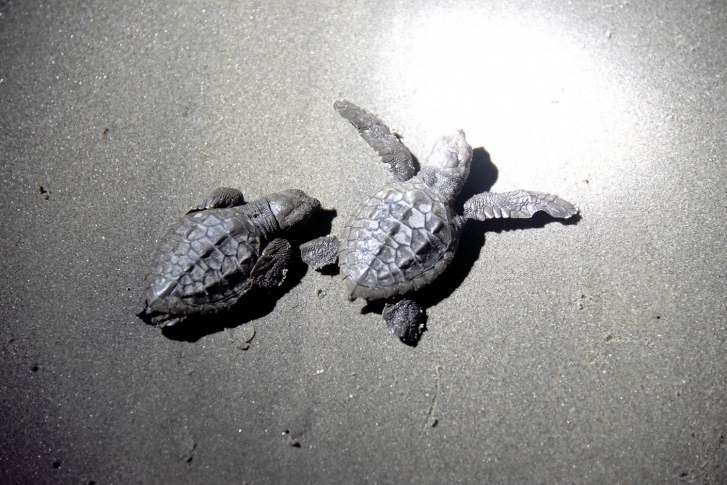 PANJIM: In an absolutely shocking revelation, a forest guard has come under severe criticism for intentionally delaying the release of Olive Ridley turtles into the sea at Morjim.

A Delhi-based tourist on condition of anonymity told Herald that the forest guard posted at the turtle nesting site informed them about the release date and time over phone and charged them for the information provided.

Condemning this highly unethical and anti-wildlife protection act at the turtle nesting sites, Morjim panchayat member Pawan Morje said that such things should not be tolerated and demanded that the Forest Department should initiate

stern action against all those involved in such acts.

A resident from Morjim also alleged that the forest guard does not release the hatchlings at one go but keeps a few in the bucket for his vested interest, and releases them after the tourists he had contacted, arrive at the site.

When contacted, Additional Principal Chief Conservator of Forests (APCCF) Santosh Kumar warned that such things will not be tolerated and that strict action will be initiated against the guards, who are involved in such illegal activities.

Herald visited the nesting site and was surprised to see that a crowd was entering the barricade and lifting the young hatchlings ignoring the instructions given by forest guards. Many domestic tourists were found deviating hatchlings from their forward path in the direction comfortable for them to capture a photograph. Few hatchlings on their way to water were seen falling under the feet of tourists at the ‘location of release’.

APCCF Kumar said that the Forest Department will investigate the matter and see to it that the barricades are made broader so as not to allow the visitors to enter the site of release.

Sarita Fernandes, Founder and Managing Trustee of Morjim Sea Turtle Trust (now Goa Sea Turtle Trust) said, “Olive Ridley baby hatchlings must be released immediately after they are hatched. The newborn turtles have a yolk sac on their underbelly which keeps them nourished for about a week before they become capable to find their own food. This food sac also gives them the energy to swim towards the sea and escape from the predators present on the shore.”

The forest guard said that the hatching takes around 45 to 60 days to pip and come out of the eggshell. This year a total of 5,118 eggs were laid on the seashore of which 4,339 hatchlings from 46 nests have been released into the sea at Morjim.

However, he cautioned that multiple threats exist even after releasing the hatchlings into seawater. There are marine predators like seabirds and fishes. Hatchlings also fall victim to crabs, mammals and birds on their way to water, he added.

Fernandes has demanded that tourists and visitors who don’t listen to the forest guards and follow the code of conduct must be fined as per the provisions of Schedule I of the Wildlife Protection Act, 1984.

Morje said the protected nesting site is the pride of Morjim village and urged the forest guards working at the hatcheries and employed to protect the hatchlings to keep a strict vigil and do not allow visitors to enter the release site.