A homecoming for 416 sons of the soil

The seafarers, who were stranded in Italy, landed at Dabolim airport in three flights 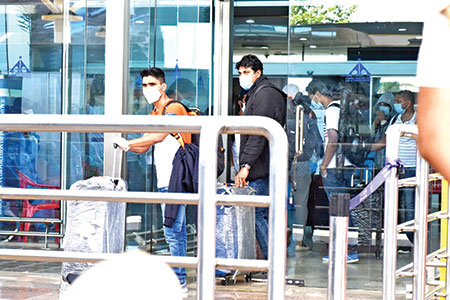 VASCO: It was a homecoming for sons of the soil, who were stranded in Italy, as 416 Goan seafarers landed at the Dabolim airport on Wednesday in three flights.

The passengers, who were checked thoroughly as per the standard operating procedure (SOP), were directed to board the Kadamba buses assigned to take them to the hotels where they will be quarantined.

Speaking to media persons, Dabolim Airport Director, Gagan Malik said, “The first flight with 168 passengers from Italy reached Goa. The second flight with 167 on board landed at the Goa airport at 3 pm.”

Sources informed that the third flight with 81 passengers landed at night.

“The passengers, whose swab tests were conducted, were ferried in buses from the airport. These passengers will be sent to the hotels where they will be quarantined. It is also expected that in the third flight around 100 Italians will go back to their country from Goa," Malik added.