A tributary of coal dust: Pale fisherfolk caught in a net of neglect as double tracking set to double their miseries

Herald discovers huge pieces of coal all along the railway track at Pale-Velsao: Locals will present it to CM and his cabinet on Statehood Day 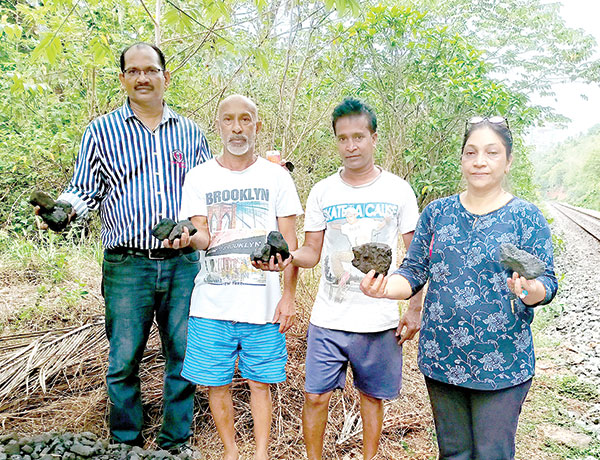 VELSAO-PALE: Double tracking is not just crushing a village; it’s crushing a way of life. The quaint fishing village of Pale next to Velsao, is one of the last dots in this gorgeous coastline before it turns towards the Mormugao harbour. This tributary, a starting point of the Sal, is one of the last villages before Vasco, the ultimate stop on the Margao-Vasco route, which will be double-tracked to carry coal-laden wagons from the port to steel units in Karnataka.

There’s a sense of loss, not just because many of the homes next to the elevated tracks will have to for the tacks to expand. The sense of loss is also because this expansion would lead to shrunken lives and the erosion of traditional occupations like fishing.

Team Herald got a real sense of what life was like by the tracks in a village of all-pervasive beauty. This reporter and the locals climbed up the small hill to see the railway tracks which are located much higher than the houses situated below.

“Over here, we have a gift which has been collected by the Railway personnel themselves. Gift that has come all the way from Australia and a gift that we are going to give to the Chief Minister and all cabinet ministers on May 30, Goa Statehood Day,” said Orville Dourado Rodrigues, GE founder member.

“There are plans afoot to build a pier or a jetty here by the river, which is the lifeline of South Goa.  Crude oil will be transported from here to a refinery in Mangalore. The railways want to acquire the land here but this area falls under CRZ and there are permissions needed to carry out work here. We have asked the authorities to show these documents, but they have been silent,” Rodrigues added.

If the double-tracking project materialises, all the low-lying areas surrounding the hillock will be filled to create space for the loop lines of the track, and Mollo, the hamlet in Pale village, will be crushed in the bargain.

In the quintessential fishing area of Mollo ward in Pale, there’s a way of life here that is Goemkarponn at its best. You are surrounded by nature’s bounty, tall and strong coconut trees overlooking the river on one side, and a hill on the opposite side that has small houses in front of them that are lined beside a narrow road.

The tributary there is one of the starting points of River Sal, there is a spring located on the hill where people from all over Goa would visit during the holidays.

However, even as the Goans living here grind out their living through traditional occupations, there is a cloud of gloom over them as they fear the double-tracking project will take away these God-given gifts of natural resources and with that their livelihoods, homes, and future.

“Over 400 police had come here, to support the Railways who want to take our lands but have no documents to support their claims. What about our problems? We don’t get to sleep at night. The Chief Minister has come here and gone. Even Rahul Gandhi had visited here. The government is favouring the railways instead of helping us. All our houses will get destroyed. Is there no concern about that?” asked Jose Vaz.

Another resident Xavier Vaz added that it is also important that the authorities need to look at the decay of the river that is covered with coal dust.

Locals recall the time when they could get a ‘solar harvest’ and collect ‘tisreos’ (clams), which they would use to make dishes at home but now that no longer happens as there are hardly any fish or shellfish in the water anymore. They added that there used to be even seashells here but lamented that the present generation of young children and the next generation won’t get to see the treasures of their backyard.

Another issue, which has troubled these locals and those living in neighbouring villages, is how the railways are blocking their traditional right of way and how these century-old pathways will be gobbled up if these lands are acquired for the double-tracking projects.

In Velsao, in front of Orville’s ancestral house that was built around 280 years ago, the Railways had prevented the local panchayat in the 1990s from building a road claiming that the land belonged to the railways. Now, the locals found out that the road does not belong to the railways but to the public.

“We asked the railways for proof to show if the road is theirs. But for years the public has been denied a proper road even though there are so many people living here and for whom this is the only access.” Rodrigues lamented.

“In the 1990s when the Southwestern Railway laid the broad gauge, they shifted the tracks by six to seven metres to the western side, closer to the residential area, which forced the inhabitants to demolish their ancestral houses and reconstruct them. Now with the double-tracking proposal, the railways want to grab more land, which means they will have to go through that process all over again.  Why? They are not at fault here but this is their plight?” Rodrigues questioned.

The paddy fields of these residents too have been badly affected with production levels at an all-time low while traditional ‘ramponnkars’ (fishermen) are also complaining about not being able to catch enough fish anymore. Coupled with the contamination of underground resources, the locals are left to wonder what is to become of them and hate the fact that they are being treated as fugitives in their own land.