After arrest and bail, Pastor Domnic’s tax waiver for his car may be withdrawn

Eight years after granting tax waiver for his car, Govt “audit” now finds waiver shouldn’t have been given for a luxury car 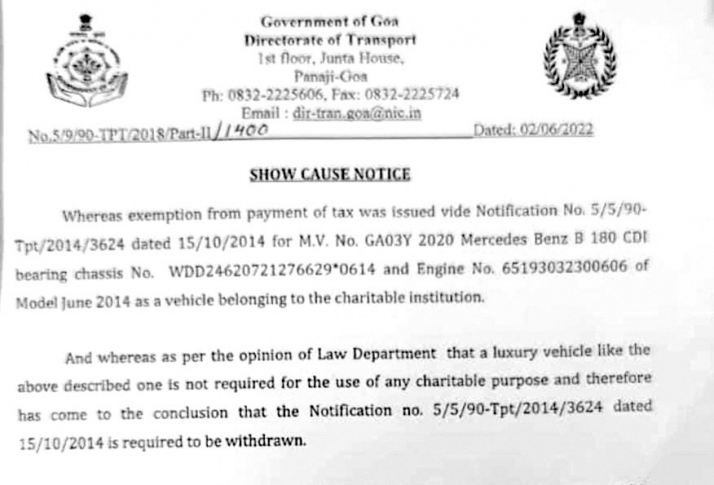 PANJIM: Pastor Domnic D’Souza, from Siolim booked for alleged forced religious conversion, but released on bail immediately by the court, now has another reason to worry.

He might have to shell out Rs 4-5 lakh to the Transport Department if he loses the case over the waiver of road tax. On Thursday, the department will conclude hearing into a notice issued to D’Souza asking to show cause why its decision in 2014 to waive road tax on his luxury car not be revoked.

On the first day of the hearing on Wednesday, D’Souza sought time to reply following which the department adjourned the matter for a final hearing on Thursday.

Sources said that as per the existing Act, charitable trusts and NGOs are exempted from tax benefits that D’Souza availed. However, the government’s recent audit report stated that D’Souza has “wrongly taken advantage” of the scheme by purchasing the luxury

Mercedes car. “He could have used any non-luxury car for the charitable work, which has now come under the scrutiny of the police and the government,” said sources.

The report has been accepted by the law department following which the Transport Department issued the pastor a show-cause notice. If he is unable to explain the purpose of his luxury purchase, he will have to pay a whopping Rs 4-5 lakh towards the tax to the department. “All eyes are on the order on Thursday,” a government official said.