Concerned about how the news about the deaths will spoil the reputation of the coastal belts, locals have complained about the ‘many’ problems they face, such as the noise, air pollution and traffic congestion; Worried about Goan youth addiction 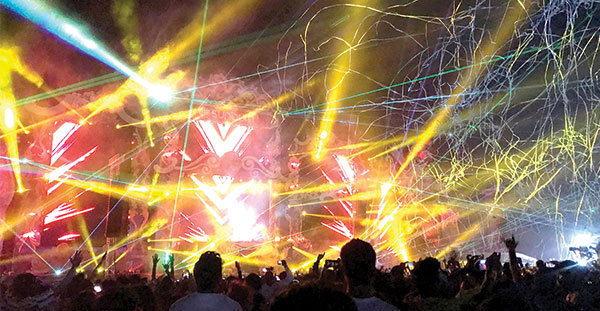 MAPUSA:  Against the backdrop of the widespread outrage over the recent death of three youth, locals from Anjuna Caisua village have said a ‘big no’ to such type of electronic dance music (EDM) events.
They expressed concern about the damage to the reputation of their villages as a preferred tourist destination. They said that such type of incidents could deter future visitors.
Locals were also worried that their villages will attract the type of visitors who think they can get drugs easily.
Loclas from Anjuna- Caisua also blamed EDMs for ruining the younger generation, who they say ‘get attracted to such events and fall prey to drug consumption and other illegal activities’.
Locals cited the example about the recent deaths, which they allege was drug- related to support their argument.
On the other hand, locals also lamented about the unwanted side effects, such EDMs bring to the village.
“These events cause a lot of inconvenience to villagers. A lot of noise and air pollution as well as traffic congestion that makes the area unbearable. There are also constant power cuts at this time in the village, which adds to the nightmarish experience,” said a local.
Locals were also highly critical of the lackadaisical attitude of the government authorities. They alleged that the government looks the other way as ‘they receive their share before such events can even begin’.
“Such events are not of any benefit to the villagers. It only benefits those few who put up stalls and hoteliers. And yes the panchayat. Other than that, the entire village suffers,” said Nilesh Naik.
Reiterating that there is a lot of disturbance in the village, locals highlighted the plight of senior citizens who are troubled not only during the day but also at night due to the noise from the after parties.
“We do not want such events in our village. The village comes to a standstill during the days of the events and due to the traffic problems, residents face difficulties in reaching home and sometimes take a detour of an extra 4-5 kms,” added Ramesh Naik.
Michael D’Souza, Chairman of Biodiversity Committee of Anjuna Caisua, questioned the infrastructure set up to prevent and nab those selling and consuming drugs and claimed that it’s just put up for show and alleged that there is illegal activity taking place, which goes undetected.
“CCTVs are installed only at the entry and exit areas while others are just placed for namesake,” he added, while explaining his opposition to such events based on the problems locals have to face and endure.
Locals also came down heavily on the existing drug trade in the coastal belt and how the youth are getting affected by the same. ‘This only adds to the problems when these EDM festivals take place,’ they stated.
A local Balbhim Malwankar, who is a member of the fishing committee, criticised the anti-narcotics cell for not having the right intentions during such events.
He further alleged that the government is supporting such events as they are involved in drug-related affairs as well.
He also spoke about how women of the area feel scared to move out during such festivals as there have been many cases where people attending such EDMS, roam around in an intoxicated and inebriated state and try to misbehave with women.
Meanwhile, the Sarpanch of Anjuna- Caisua panchayat, Patrick Savio Almeida said that if such incidents are reported then such type of events should not take place.
“Precautions should be taken into consideration when EDMs and they should be implemented properly,” said Almeida while putting the onus on Goa police to see that things are under control and to look into such drug-related incidents.
He also emphasised that the villagers should not suffer due to such events while listing out the problems they face. He felt that the government stays calm due to the revenue they receive.
“The revenue that the government receives from the organizers should be utilised to create infrastructure development,” said Almeida, while pointing out that care should be taken to ensure that the people of the village do not suffer.
Related news