Anwar expresses desire to be a good human being in video 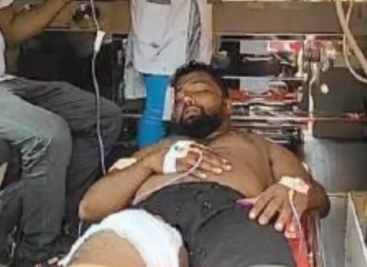 PANJIM: The man with criminal cases, who once shot videos of him moving around like a don inside Colvale Jail, has decided to quit crime world and focus on being a ‘good human being’.

Hazrat Ali Shaikh alias Anwar Shaikh, has been accused and arrested in connection with several crimes, including abduction, rape, assault, dacoity, burglary, rioting, etc. His last video from the jail brought him to limelight last year. While he remained underground after his release on conditional bail, he is back in the news this time for an attack on him.

In an 11-minute-long video, Anwar has expressed his desire to transform into a good being but also warned to expose his rivals involved in attempting to kill him at Fatorda last week.

“I don’t want any mess around me. Hence, I will not resort to any crime,” he said in a viral video, which has been picked by a local news channel.

Anwar also claimed his mobile phone contains evidence against his rival gang members -- Imran Bepari, Ricky Hornekar and Velly D’Souza and others that would expose their crime record.

“I can identify all, even Imran Bepari, who attacked me. They were carrying big choppers, gun, baseball bat and rods. They missed the first gun shot fired at me, after which they fired another round on my leg. What if the first shot had to hit an innocent?” he said in the video, which seems to be an attempt to garner sympathy.

“My mobile phone has all the proof (against my attackers). I could take revenge by treating them the same way they did to me but I don’t want to get my hands dirty. I don’t say I am good…I am also a goon but every person should get a chance to transform. I request you all to allow me to become a good person,” he appealed, message which was meant for his rivals currently undergoing custodial interrogation at Fatorda Police Station.

With a long list of serious cognizable offences pending investigation/trial against him, Anwar was recently discharged from Goa Medical College and Hospital where he underwent treatment for serious injuries sustained during the attack on him. Anwar has also denied allegations of hafta collection over illegal sand extraction claiming government has banned this activity. As he ended his video with repeated warning to expose his rivals, he also sought political protection urging “Damu Naik” to help him get justice.