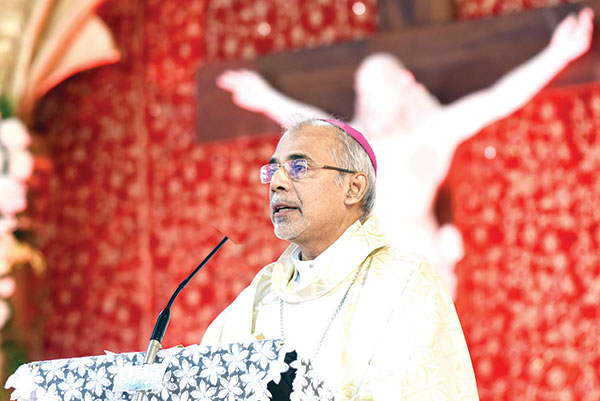 Old Goa: Archbishop of Goa and Daman Rev Filipe Neri Ferrao admonished all those involved in allowing an illegal structure come up in a protected area of Old Goa thereby threatening the heritage of religious structures in the area.

In his address to the gathering and those watching the High Mass of the Feast of St Francis Xavier at Old Goa, the Archbishop said, “I ask for a few moments of your precious attention. We have all gathered not only in a holy precinct but also in a world renowned heritage area, recognised as such by our central government , by that I mean , the Archaeological Survey of India (ASI) and also by UNESCO. We should know that any undue or offensive interventions even by legitimate stakeholders in and around these monuments can have great consequences and even attract the derecognition of their world heritage status which would be a tremendous and severe loss to Goa. In this context, I would like to express the solidarity of the church in Goa with several of our brothers and sisters of different faiths who have been undertaking various demonstrations for many days now in protest against some obnoxious activities in this heritage site. I strongly appeal to all those in authority to refrain from any acts and decisions which are illegal and detrimental to the preservation of religious and heritage sanctity of Old Goa.”

The Bishops remarks will give a huge boost to the people's movement and send clear signals to political parties and individuals who have at some stage directly helped or indirectly facilitated a project that was cleared in completely fraudulent manner.

Meanwhile, thousands of people descended in Old Goa on Friday to attend the feast of ‘Goencho Saib’ – St Francis Xavier – which was celebrated with traditional grandeur and with religious fervour. Unlike the previous days that saw heavy and unseasonal rain play spoilsport to some of the novena masses, there were clear skies as devotees gathered for the masses that began as early as 3.30am. The High Mass at 10am was celebrated by the Bishop Emeritus of the Diocese of Port Blair, Rev Alex Dias, who delivered his homily on the theme of the Feast and Novenas, which was ‘Stay with us, to live Communion, Participation
and Mission like St Francis Xavier’.
The other concelebrants were Archbishop of Goa and
Daman, Rev Filipe Neri Ferrao and Sindhudurg Bishop Allwyn
Barretto and other priests including Fr Jose Remedios
Fernandes, Vicar General of the Archdiocese of Goa and
Daman; Fr Patricio Fernandes, Rector of Bom Jesus Basilica;
Fr Rosario Oliveira, Parish Priest of Se Cathedral and others.
Related news