Areal villagers put their hands in their pockets to build their ‘bridge’, when the government failed to

Locals of Sao Jose de Areal have re-built a Portuguese-era culvert crucial for connectivity; People’s culvert to be inaugurated on Republic Day, today 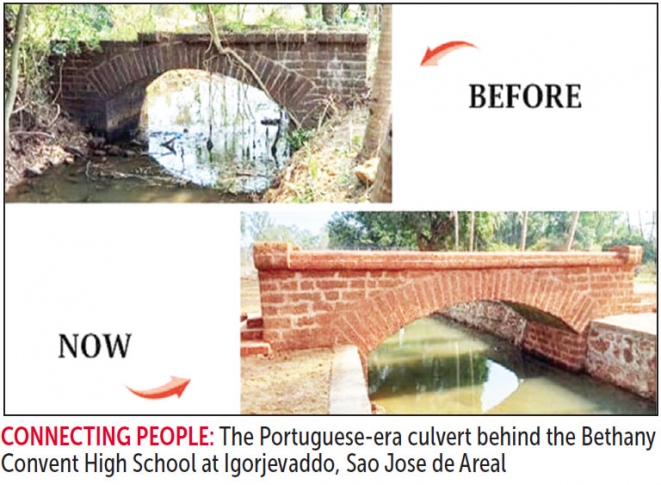 MARGAO: Displaying utter dedication and love for their village, a group of locals from Sao Jose de Areal have succeeded in their restoration efforts and have contributed to a good cause by renovating one of the heritage sites in the village – a Portuguese–era culvert, which was in bad shape.

This is a classic example of taking Governance in their own hands and comes in sharp contrast to  Rs 300 to 4000 crore spent for supposed environment projects in the State.

The renovation comes after the government authorities failed to restore the old culvert which was in a dilapidated condition.

The renovated culvert, which will be inaugurated on Republic Day, January 26, will be dedicated to senior citizens.

The culvert will once again play a major role in connecting the two villages of Sao Jose de Areal and Dicarpale.

A group of villagers from Sao Jose de Areal were forced to take up the renovation work of the culvert, after noticing that the structure was neglected by the government authorities and the panchayat body for the past several decades.

The above Portuguese-era culvert is located at Igorjevaddo, behind Bethany Convent High School.

“Yes, it was an initiative of the villagers of Sao Jose de Areal and there is neither support from the political leaders nor any government authorities in restoring it,” said Freddy Travaso, a villager.

He said that except for the current ward panch, we got no support from political leaders. A group of villagers managed to contribute to a good cause.

“Many villagers responded to calls and offered their support in cash and in kind. Few managed to take the responsibility of labourers, which made it possible to complete the renovation work,” Freddy informed.

According to him, this culvert played a major role in connecting the people of Sao Jose de Areal and Dicarpale villages, when Chandor was the Capital of Goa.

“Everything can be made possible if citizens take up the initiatives,” he said.

Freddy said, “This culvert will be dedicated to the senior citizens with love from the villagers so that they can spend their time here and by taking precautions to ensure that no nuisance is created.”

Edison Cardozo, another villager, told Herald that the culvert renovation is an attempt to restore one of the heritage sites in Sao Jose De Areal.

“This bridge will also help the senior citizens of the village to spend their time in a peaceful environment. They will get an ideal site to relax and it will add beauty to the village,” he stated.