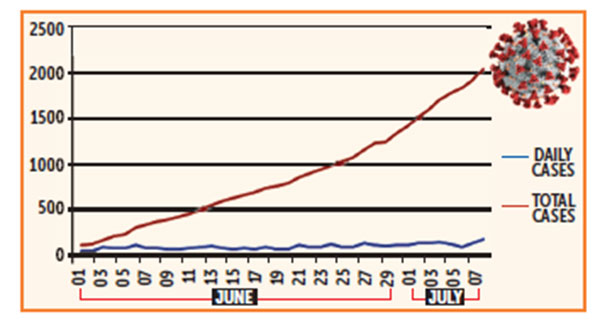 PANJIM: With over 136 new cases, the highest in a day, Goa went past the 2000 cases mark on Wednesday with COVID-19 showing no signs of receding in the State despite several measures announced by the government. The latest measure is to begin plasma treatment for critical patients, which it to begin next week.

As per the health bulletin, the confirmed cases now stand at 2,039 with 824 active cases and 1,207 recoveries. There have been eight deaths in the State.

After Salcete, cases in Bardez now appear to be on the rise as a private hospital was sealed Wednesday morning after a patient attendant tested positive for COVID.

Several Colva Jail staffers were also lined up for testing as a jail guard tested positive for COVID-19.

Elsewhere, the cases continued in the hinterlands of Goa even as the authorities informed that utmost care is being taken to contain the spread of virus.

Earlier in the day, following the increase in COVID-19 related deaths in the State, the government decided to start plasma therapy for critical patients to shorten the time of treatment at Goa Medical College by next week.

Sawant said patients who have been cured and another two weeks have passed since their recovery will be called to donate the plasma. “The plasma will be taken only if they are willing,” he said.

For this, he said, the government has ordered an apheresis machine. “The machine will be delivered in the next three days,” he said.

Besides this, Sawant said that the government will also require one technical person to operate the machine – an MD transfusion doctor. “I have asked GMC dean to complete the appointment on contract basis in the next eight days,” he said.

The Chief Minister said the plasma would be stored somewhere near the blood bank. “The machine can store 4000 packets. Initially we will store 2000 but we have ordered 4000 packets just in case there is a requirement,” he said.

To a query, he said the plasma therapy will begin from next week in GMC.

In the study, published in The American Journal of Pathology, scientists described the clinical outcomes of convalescent plasma transfusion trial, showing 19 out of 25 patients improving with the treatment, and 11 discharged from hospital.

However, the study noted that a randomised clinical trial, with a large control group, is needed to validate the findings. According to researchers, this is the largest cohort worldwide assessed for outcomes pertaining to convalescent plasma transfusion for Covid-19, and is the first peer-reviewed publication on convalescent plasma use in the US.