Team leaves for Karnataka, to return to Goa today for inspection of Tamnar Transmission Line project 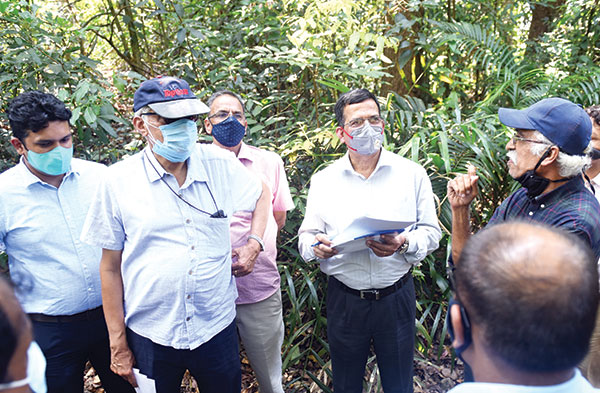 MOLLEM: The Central Empowered Committee (CEC) constituted by the Supreme Court of India started the site inspection of the three linear projects passing through Goa and Karnataka forests and urged the project proponent departments – PWD and NHAI – to have as many diversions as possible and restrict tree felling to the minimum.

Goa Foundation’s Claude Alvares, who is the complainant in the matter, was also present for the site inspection. Alvares assisted the team in showing how the NH4A project is going to impact the forest and wildlife sanctuary.

The CEC team left for inspection to Castle Rock and Tinai Ghat in Karnataka and will return to Goa on Friday. The team will conduct an inspection for the double tracking project on Friday from Tinai Ghat to Caranzol. 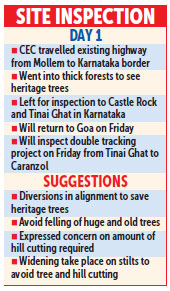 The team travelled the entire existing highway from Mollem to Karnataka border and also went into the thick forests to see heritage trees on the request of Alvares. During the inspection, the team suggested some diversions in alignment to save heritage trees.

“Try to avoid felling of huge and old trees. Change the alignment a bit and get back during our next meeting,” the CEC team told the PWD engineers.

It is learnt that the team has expressed concern on the amount of hill cutting required and also suggested that the widening take place on stilts to avoid tree and hill cutting.

Speaking to Herald, PWD engineers said the CEC conducted an inspection on the NH4A widening. Engineers, speaking on condition of anonymity, said there will not be much impact on the forest as majority of the road would be on stilts. “There is also not going to be much of hill cutting,” they said.

They said the CEC has asked for changes in alignment, which will be considered and submitted afresh.  The CEC team will also meet the project officials, government officers and locals, they said.

The visit of the CEC, headed by former Union Environment Secretary P V Jayakrishnan, who had a stint as Chief Secretary of Goa in the early 1990s, has raised the hopes of environmentalists and opponents of the projects.

The three projects – doubling of the South Western Railway track, expansion of National Highway and the private power transmission lines – have faced huge protests over the last several months over fears that they will convert Goa into a coal transportation hub.