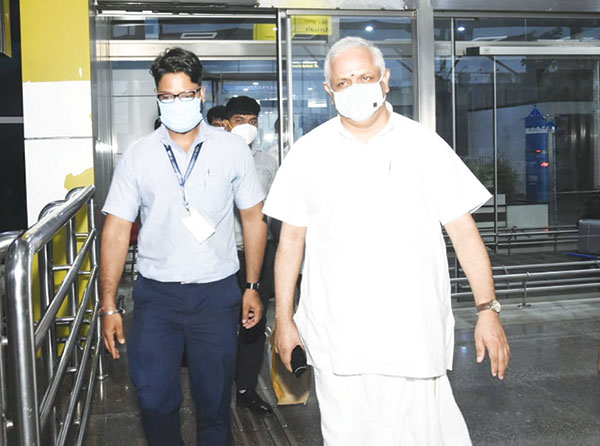 PANJIM: Bharatiya Janata Party central leaders left the local unit with the message of helping people during the Covid-19 pandemic and preparing to win the Assembly elections.

BJP national general secretary (organisation) B L Santosh and in charge of Goa, C T Ravi, on Thursday held extensive one-on-one meetings with the party ministers in the State during their two-day visit to Goa. 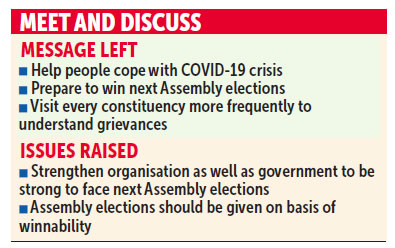 Each minister was given 10 to 15 minutes to present their case. During the meeting, Santosh is learnt to have told them to help people cope with the COVID-19 crisis and at the same time prepare to win the next Assembly elections.

Later, the national leaders met State office-bearers and the party’s core committee members in the evening.

BJP State president Sadanand Shet Tanavade said that both the leaders discussed organisational matters and also the COVID-19 situation in the State.

The party’s Goa desk in charge, C T Ravi, told media persons that Maharashtra had more COVID-19 infected cases than Goa. He said that the Goa government has handled the current pandemic situation properly when it was brought to his notice that 51 per cent positive cases were reported in Goa during the last fortnight.

Deputy Chief Minister Chandarakant (Babu) Kavlekar said the BJP national general secretary sought to know activities of various departments and works done in constituencies. “We have been asked to visit each and every constituency more frequently to understand the grievances of the people,” Kavlekar said.

Panchayats Minister Mauvin Godinho said that he had important discussions with the party leaders. “It is an exercise to strengthen the organisation as well as the government in order to be strong to face the next Assembly elections,” he said.

Ports Minister Michael Lobo said that he had informed the BJP central leaders that party tickets for the next Assembly elections should be given on the basis of winnability. “Last time we lost many seats, even ministers, due to this problem. I have given him feedback about the organisational matters in constituencies from Bardez taluka,” he said.

Arts and Culture Minister Govind Gaude, speaking to media persons said he is ready to join BJP if the party offers him a ticket. “I have been with the BJP for the last four years and I will be with the BJP even in future,” he said.

Revenue Minister Jennifer Monserrate said that it was a general meeting with the party leaders. “They asked me how I will go forward in the coming elections in my constituency,” she said.

Ravi also claimed that India is the only country which had manufactured two COVID-19 vaccines in the last one year to fight Coronavirus.

Ravi further said that BJP is not only working for winning elections but it is working tirelessly for the people.

Both party leaders will leave for New Delhi on Friday morning.