Fought back using his mind over their fists; Hasn’t given up on dream to work in Canada 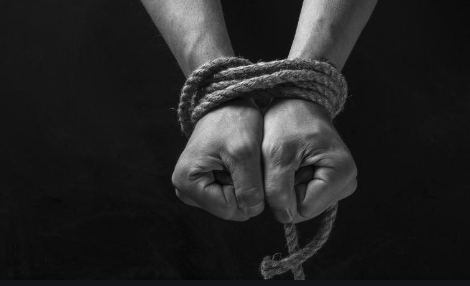 PANJIM: The 28-year-old Afghan national, who became a victim of an overseas job fraud, was kept naked and was beaten regularly by the criminal gang that held him captive at a bungalow in Porvorim. He was tortured by the gang of 13, including a minor, until Goa Police conducted a rescue operation on February 11.

In his first media interview after his rescue, Shapoor Zarifi admitted that he did get a whiff of something suspicious but didn’t anticipate being abducted and ransom demands.

“It was through an agent in Kabul that I planned to travel to Canada for better prospects. I was informed about travelling to Goa in around 10 days but on February 7, the Kabul agent asked me to leave for Dabolim airport without wasting time. I demanded to know the reason for this haste but he convinced me that my flight for Toronto was booked for February 8,” Shapoor told Herald as he began explaining his five-day ordeal.

The Afghan national, living in Delhi since 2015, landed at Dabolim international airport on that Sunday evening and received a series of WhatsApp calls from Dubai, Malaysia and Turkey. The first caller from Dubai identified himself as Dr Fayaz. “He (Fayaz) said they are following up procedures for my departure to Toronto, and asked me to check-in to a high-end hotel close to the airport to impress immigration officials. I replied that it was not on the agenda. Fayaz told me that immigration officials will visit me to complete the required formalities. I called up my travel agent in Kabul who assured me that every penny I spend from my pocket will be reimbursed. I moved accordingly,” he added. 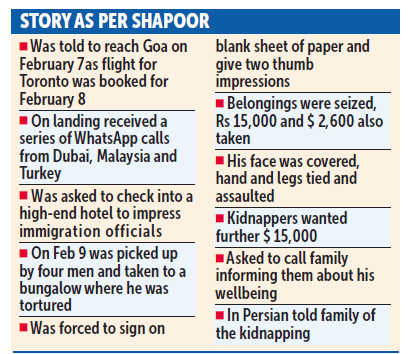 After playing hide and seek with the victim, a group of four men, including a car driver, picked Shapoor from the hotel at around 8pm on February 9. Two of them, he later identified and both are amongst the 12 persons arrested for the offence. The juvenile, being under 18 years, has been sent to correctional home Apna Ghar.

Shapoor was taken to a bungalow where the torture began. He recalled being forced to sign on a blank sheet of paper and give two thumb impressions. His belongings were seized by the accused while Rs 15,000 Indian currency and $ 2,600 were also taken away. A property dealer by profession, Shapoor’s kidnappers covered his face, tied his hands and legs, and assaulted him with sticks. He even fell unconscious at one point of time. “I asked them what they wanted from me. They wanted me to cooperate with them and I agreed. I requested them not to assault me and they later allowed me to put on my clothes,” the youth recalled.

The kidnappers further planned to demand $ 15,000 from the victim’s family. They then asked Shapoor to call his family informing them about his wellbeing and that he will soon depart for Toronto via Delhi. “They would change the mobile location as per their wish and asked me to inform my family that my mobile phone will mostly remain in switched off mode and with another person accompanying me to Toronto,” he said.

The Afghani spoke to his mother and fiancée Hafeeza in their native Persian. During his conversation he told them about his abduction. “I had to play smart as my kidnappers were Google translating my language. In between my conversation I hinted to my family in short sentences that I was kidnapped and they should not pay any ransom,” he said.

Hafeeza approached the Delhi Police, who transferred the case to their counterparts in Goa. In the meantime, Shapoor’s family rushed to Goa and met the Vasco Police. Initially, the rescued foreigner claimed, that police suspected it was a movie script narration but they were prompt to act on the leads. Shapoor was rescued in a successful raid on February 11 and along with him, a Punjabi youth was also released.

While Shapoor still wants to pursue his dream of working in Canada, the next time he is determined not to fall prey to any conspiracy. All the accused – two of whom are Goans have been arrested. As per the victim, the accused mainly communicated with each other in Haryanvi.