According to local sources, the driver of the taxi, Benny Pereira, who is also from Chinchinim, was not supposed to have been driving the taxi on that fateful night. MARGAO: While the surviving victims of the gruesome car accident that took place on Tuesday morning are recovering from their injuries, they are yet to come to terms with the tragic loss of two of their beloved family members.

According to sources, as of Wednesday evening, the post-mortem of the two deceased victims Joaquim Rodrigues and Lina Albertina Joaquina Rocha Rodrigues is yet to be completed and only after that will the family decide a date for their funeral service. Police said that the deceased couple's daughter Jessie Ciba Rodrigues and their 16-year-old granddaughter Venetia Noronha have been admitted to the South Goa District Hospital at Margao while Santan is undergoing treatment at the Goa

Medical College and Hospital at Bambolim. However, back in Tolleabandh, Chinchinim, the neighbourhood of Rodrigues’s son-in-law Santano Robino Noronha, relatives have raised questions about the conduct of the owner of the taxi that was hired to pick up the family from the airport.

According to local sources, the driver of the taxi, Benny Pereira, who is also from Chinchinim, was not supposed to have been driving the taxi on that fateful night. Pereira dozed off while driving, which led to the accident. 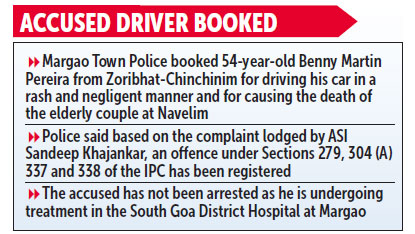 Locals said that Benny works at a hotel and he was working a late-night shift that particular Monday night. They added that the plan for him to head to the airport early Tuesday morning for the pickup was made at the last minute. Locals from Chinchinim were questioning if the owner of the taxi should have assigned another driver or driven the taxi himself, given that Pereira would have been fatigued from his night shift. 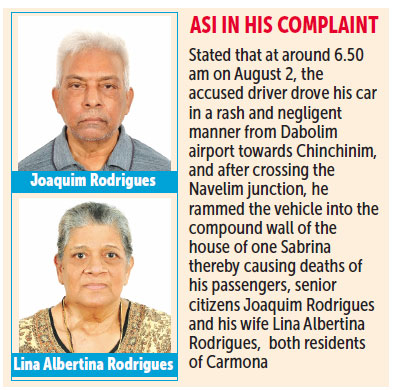 Meanwhile, members of the taxi community pointed out that such accidents are rare. They said they have been driving families and tourists to the airport, and other places within the State and to other states, for decades without such incidents occurring. They however said that they try and make sure that the taxi drivers are rested before taking such journeys. "Sometimes, we get requests at the last minute and arrangements have to be made then and there. If the driver is not feeling well or is tired, then a substitute driver should be arranged for," said a taxi driver from Margao.

The Gulf-based couple were visiting Goa after several years, to attend a special mass for their other granddaughter, who passed away a year ago after an illness.