A video of CISF personnel, acting against those moving on the street, went viral on social media; Says those purposely violating the lockdown norms will be punished as per Epidemic Act 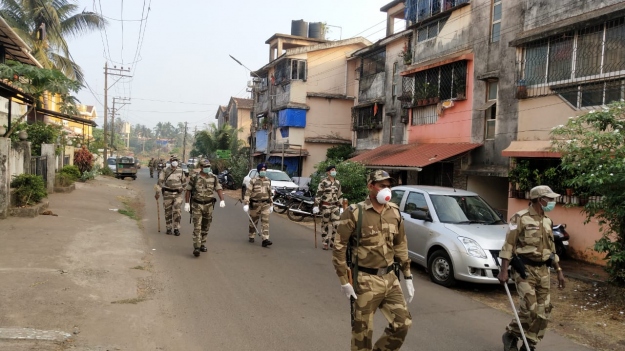 PANJIM: The people have termed that the action taken by CISF personnel as “inhumane”, while Chief Minister Dr Pramod Sawant has defended the action stating that those purposely violating the lockdown norms will be punished as per Epidemic Act.

A video of CISF personnel, taking action against those moving on the street, went viral on social media on Sunday.

In a letter to Chief Minister, Goa People’s Voice COVID-19 Response member Albertina Almeida has protested against deployment CISF for violating the lockdown.

“We take strong objection to both the request for and the deployment of Central force in Goa to discipline the people who are said to be loitering on the streets in various localities of Goa,” she said in the letter signed by over 180 persons.

“Deployment of CISF in Goa, only goes to show that we are treating a humanitarian crisis as law and order problem and intending to use force to handle the crisis, without realising that it will not work and will in fact cause further human rights violations,” Almeida said.

She said that deploying CISF in Goa could lead to uncontrollable civil unrest if hungry citizens are met with by CISF ‘disciplining’.

“People are on the roads on account of lack of clarity and confusion due to constantly changing announcements about supply of essential commodities and services, with no real systematic access to food. Their anxiety and desperation levels are high. When food is not available, it leads to public anger, and as the scarcity increases, looting and violence takes place,” she added.

When Chief Minister was asked about the same, he said that action against those purposely violating the order has to be taken.

“Despite warnings, people come on road without any reason. Mostly the youth move out having no work to do. We have to ensure that lockdown is implemented. Those who go out to buy grocery or medicines, we don’t do anything,” he explained.

“Despite repeated warnings if one continues to do so, then we are bound to take action,” Sawant added.