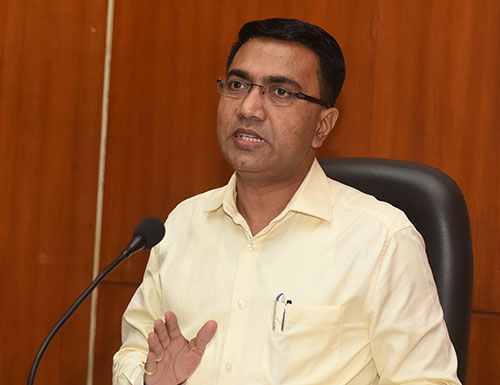 Margao: Chief Minister Dr Pramod Sawant reassured that the Major Ports Authority Act will not take away power of the state government and said  there are misconceptions regarding the bill.

The people now fail to understand who is to be believed in this matter, the Deputy Chief Minister or TCP Minister.

The Deputy Chief Minister in his reply to an assembly question admitted that the likely implications of the Bill for the State are “redundancy of Goa Town & Country Planning Act and the Regional Plan/ODPs prepared thereunder, Goa Municipalities Act. Goa Panchayati Raj Act, Goa Land Development and Construction Regulations, 2010 and Goa Land Revenue Code in respect of area under the ownership of the Board constituted by Major Ports and consequent revenue loss on account of the same".

Sawant said Sagarmala was a survey and had suggested what can be done. According to him, MPT and the Government have already communicated the suggestions are not possible to be implemented in Goa.

Sawant said there is a misconception regarding the Major Ports Act. "The jetties and ports planned are not for transportation of goods or commodities. It is for the development of fishing and tourism and North to South Tourism connectivity" said Sawant.

When asked whether MPT gets superpower through the bill he said no and added that they will take into consideration the concerns of the State before proceeding further.