CM: YOU ARE THE CUSTODIAN OF OUR MINING RESOURCES & PEOPLE ARE THE SHAREHOLDERS

Mining barons in Goa and outside Goa should be kept totally out of any form of mining activity, even directly 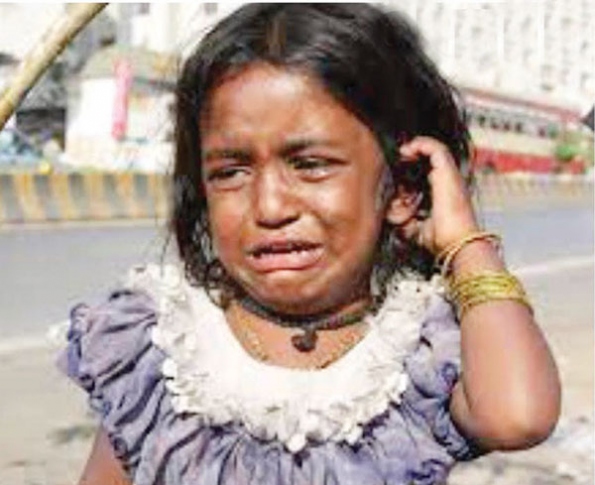 We are sure that by now there is absolutely no doubt about these three things. Let them be engraved in the minds of every Goan, every politician, every mining dependent, and most important every mining baron.

2) THERE SHOULD BE NO AUCTIONS EVEN THOUGHT OF. THE MINING CORPORATION IS THE BEST ALTERNATIVE. AUCTIONS WILL ONLY ALLOW THE GOA-BASED MINING TYCOONS AS WELL OUTSIDE BUSINESS LOBBIES WITH POLITICAL INTERESTS AT THE CENTRE TO TAKE CONTROL OVER GIAN MINING. IF THAT HAPPENS ALL THAT WE HAVE FOUGHT FOR AND WON, (OUR OWN RESOURCES) WILL BE GONE FROM US AND FROM OUR CHILDREN

4) Profits from mining should be kept in a permanent fund to be used for the development of infrastructure in the mining belt as well as used to increase self-reliance among people by helping small businesses, local tenders for works etc

5) Contracts will be given for extraction of ore and that too, only to local stakeholders, so that earnings can happen within the community and money can be out into people’s pockets

1 PROFITS OF MINING IN FUND FOR PEOPLES, AND MONEY ALSO PAID INTO PEOPLE’S ACCOUNTS

Claude Alvares of Goa Foundation under whose leadership the battle to get our mineral resources for the people of Goa was fought is extremely categorical. He told Herald- HCN, “Mining should take place only under a public sector Mining Corporation which will conduct all mining operations and exports. The money/profits of mining, which is the people’s resource should be put into a permanent fund.” Alvares went on to add that a permanent fund should be set up where all the earnings from mining can be put and used for people's welfare.

So how can this be done? Firstly the fund should be used to help people set up businesses. Then they should be trained and skilled to further be experts in trades like handicrafts, manufacturing of artisanal stuff, furniture, etc. The government then must give them access to the markets through exhibitions and other avenues.

The money in the permanent fund can then be used to create more money in people’s contracts. Tenders for local construction projects must be given to local people and major projects too.

MINING ROADS AND CORRIDORS TOO The much-needed mining corridor through barren and remote areas far from populated villages must be constructed. This should be through the mining belt right up to the port or jetties. The contract for such a road cannot go to one central contractor who is linked to the top brass of a central political party. The contract for each stretch through a villager or a cluster of villages should be given to a local contractor who should work according to t the overall specifications of the project

The Supreme Court in its judgment canceling the renewal of 88 leases said that the “very large number of renewals granted over a comparatively brief period was a clear-indication that the state did not have mineral development in mind but some other non-statutory interests”. 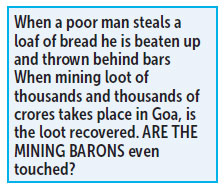 To make it easy for the common man to understand this: no mining lease can be granted unless the government is positive that it will be used for mineral development (ethical and legal extraction up to prescribed limits and legally exported). The court clearly pointed that these renewals were not aimed at mineral development but ‘non-statutory interests. This means they were renewed for reasons other than mining.

If the highest court of the land has found that the government action in granting renewals of leases were for reasons other than mining (to the same mining tycoons) how can there be an auction which will allow the same people to be a part of the process again?

This should be the guardian, custodian, and parent of all mining with the people of Goa as stake holders. The corporation should have professional mining experts from the mining schools. The mining course should be restarted in Goan colleges and university and geologists, biologists, mining infrastructure and operations graduates can be hired professionally.

MINING IS NOT ROCKET SCIENCE. Talent can be found and grown locally some from other states can be taken if there is no Goan counterpart available but it is certainly not so complicated that you needed a major mining company to take control and do mining.

The person responsible for making Goa free of those who did illegal mining should be on the board of the mining corporation. He will help regulate the mining business and process, act as the strongest checks and balance force, and ensure that the full value of the minerals is given to the people. He and Norma Alvares fought for 20 years. 18 cases were filed in the High Court the first one against the five mining leases of Dempo in Bichiolim in 1992. After 14 years in the HC they went to the Supreme Court after withdrawing all matters in the High Court and filing a comprehensive PIL in the Supreme Court

All earnings form mining will go into the permanent fund. That is a people’s fund. Money from there should go directly into people’s accounts. If you recover the Rs 3431 crores calculated loss only after mining was stopped and then add the losses due to illegal mining from 2007 to 2012, there will enough money in the permanent fund to comfortably support all Goans for a lifetime.

Moreover, contracts should be given to locals, small businesses can be set up, other infrastructure like better health facilities can be made and the mining roads to take mining trucks through a dedicated corridor to remove any spilling of ore. Good village infrastructure will also mean basic things like waste management and the construction of public toilets will take place. And not the scam that we uncovered of crores coming for public toilet construction and not a single toilet made.

THESE CONTRACTS WILL GO DIRECTLY TO LOCALS INSTEAD OF A BIG CONTRACTOR WHO WILL TAKE 35% OF THE PROFITS LEAVING NOTHING FOR THE LOCAL CONTRACTOR.

All tenders should be done in such a way that there is transparency and no settings. Ministers should not be involved in any tendering

5 Ore extraction is a big business but not for the common Goan in villages who have been involved in this but only for the mining barons. They can now become masters of their businesses and get very good earnings. Let them be paid at the highest rates and the profits go to them. With money in their pockets, they will spend more. That will help shops and other businesses. With money in everyone’s pockets, the entire economy will thrive.

FINALLY The Chief Minister and his team should be guided by their own conscience and not by any other force from the center or elsewhere.

We are sure that Chief Minister Sawant will be strong enough to take his own decisions purely keeping in mind the interests of the people of Goa, as the custodian of their wealth and interests.