Take them from Panjim to Ponda police station; Keep them for 5 hours before releasing late evening 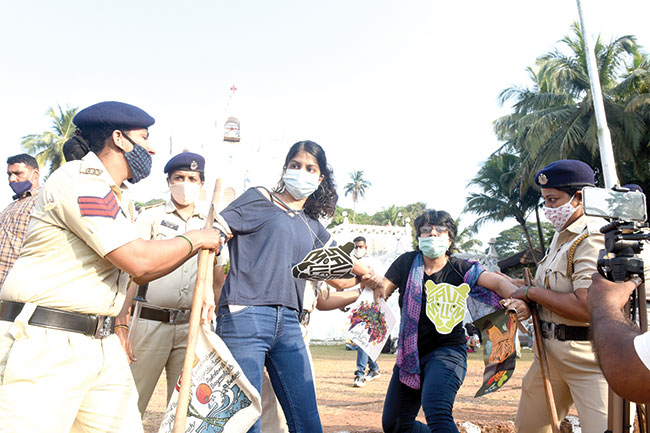 PANJIIM/PONDA: Minors, youth, women and others, who were gathering and others who were preparing to gather in Panjim for a peaceful protest against the destruction of Goa were detained on Saturday and taken to different police stations. They were released after around five hours from Ponda Police Station at around 9.15pm.

The groups had come from various parts of Goa, including Mapusa, Margao, Vasco, Chicalim, Mollem etc. They said that neither placards were shown nor slogans were shouted, but they were still forcibly detained by the police.

Some were stopped even before entering the State capital, while those who managed to reach the Panjim Church Square were forced into a police van and shifted to different police stations. The group included minors who held placards demanding that deforestation be stopped and that the State be saved from turning into a coal hub.

All this happened a couple of hours before President Ram Nath Kovind launched the year-long 60 Years of Liberation programme, at a function in Panjim, prompting twitterati to question what Liberation was being celebrated.

Captain Viratio Fernandes, co-convenor of Goencho Avaaz, who was present at Ponda said, “If Chief Minister Pramod Sawant says Bhivpachi Garaj Naa then why should the police detain silent protestors?”

He asked the police why, when they were neither protesting nor showing placards they were detained. The police said they were taking preventive measures to which Fernandes raised an objection. He asked what was the government fearing? “What kind of Liberation Day celebration is this today for the youth who have come forward to protect Goa? By detaining the youth, the government has made them heroes. Our fight against corruption will continue,” Fernandes said.

In a statement, the Save Mollem activists, said that police detained multiple youth groups and the first group consisted of students who were going towards Panjim Church to express their gratitude to the martyrs of Goa on Liberation Day.

“They were not in any way going to Azad Maidan. The Goa Police have taken them out of their jurisdiction and have not told them where they are taking them. They should have been taken to the nearest police station but the vans are driving them somewhere else,” it said.

A senior police officer confirmed that the protestors were being taken to other police stations due to security issues. “We cannot keep them in the Panjim police station jurisdiction since the President is attending two events at Azad Maidan and Dayanand Bandodkar ground. It is a matter of security,” the officer said.

Sources said that the vans plied to various police stations from Porvorim to Mapusa and later Agassaim. “We will release them after the event concludes,” the officer added.

The activists, on the other hand, demanded to know under what sections they were detained and argued that the police action accounts to unlawful detention and “can be seen as kidnapping”.

Tripolo Souza, active in the Mollem agitation said the action of the police is the worst and a black day for Goa as this occurred on Liberation Day. Rama Canconkar said it appears that they are living 60 years ago when Goa was not liberated.

AAP Leader Surel Tilve said that 60 years after Liberation the Goan youth cannot express their voice. “Their voice is suppressed. During the Portuguese era they used to arrest people for raising their voice, the same thing the Goa Police are doing. There is need of one more Liberation for Goa,” Tilve said.

Hridaynath Shirodkar condemned the detention of youth and women for long hours for staging their programme on Save Mollem, Save Goa. “This act will only inspire Goans to unite and stage agitations at various parts of Goa on a massive scale,” he said.

Reacting to the detentions, Goa Forward Party president Vijai Sardesai tweeted saying, “@DrPramodPSawant is Goa’s new #Salazar. I condemn his actions and demand the detained #youth to be #SetFree. His talks about Goa’s Future is all fake as he #oppresses our basic rights. The @goacm is leading #Goa’s new #COAL-inization. We must #stop him to #SaveGoaNow.”

Similarly, AAP Goa tweeted saying, “We are shocked to hear reports of Goans being arrested on #GoaLiberationDay by the heartless @DrPramodPSawant & @BJP4Goa!”

Activist and advocate Albertina Almeida said, “I am appalled by the behaviour of Goa Police and that too ironically on Goa Liberation Day. I saw them picking up and dragging young persons at the Church Square who were there to silently register their ambition to free Mollem from the siege on its people, trees and wildlife and some were in fact sitting in a circle talking about visions of Goa’s Liberation . They are being driven in a bus to where they do not know. Is this what Liberation is supposed to be? Do Goans not have a right to a voice?” 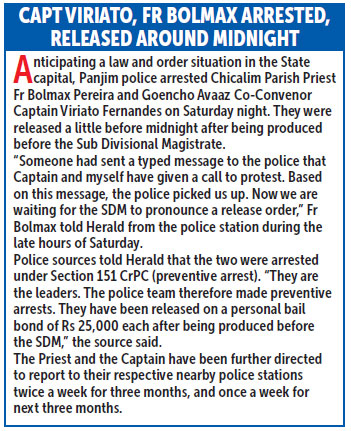 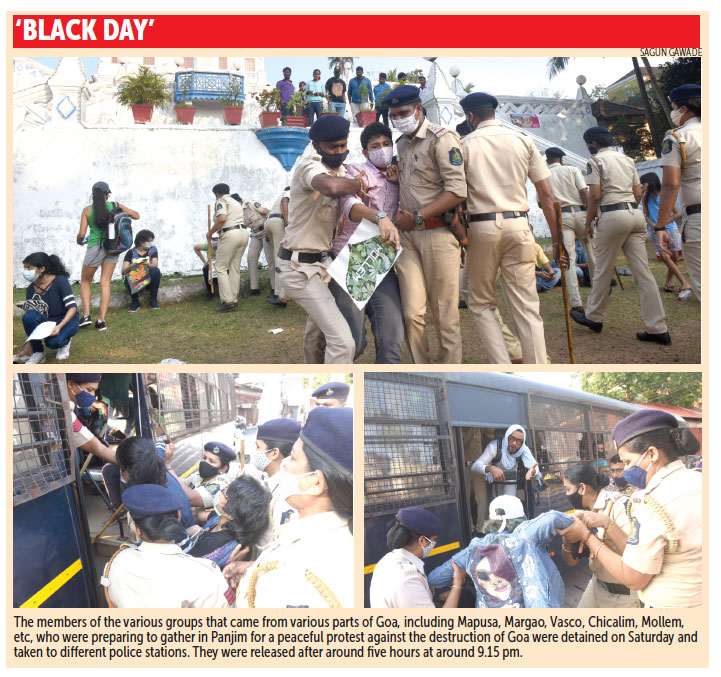