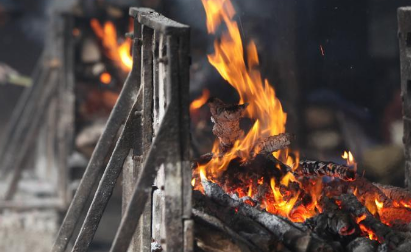 PANJIM: The bodies of the two COVID-19 patients who died earlier this week were cremated at Ponda late Wednesday night. The funerals were delayed as there was opposition from the people of Bogda, where the cremation was originally to have taken place.

Associate Professor forensics at GMC posted in public interest at Hospicio, Dr Madhu Gaude Ghodkirekal said four employees of the ESI and EMRI conducted the final rites on the dead. 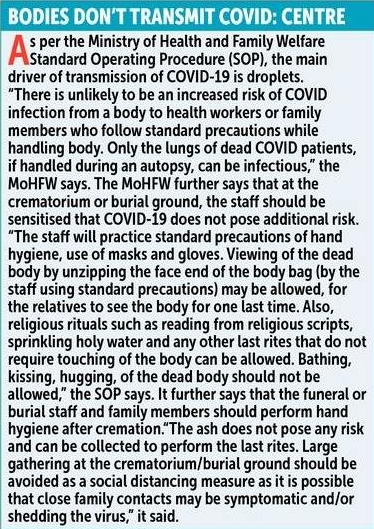 Posting on Facebook with a picture of the four persons who conducted the funeral, he wrote, “The four COVID frontiers deserve at a pat on their back, if not shower of petals over their head. They were not part of any surgery conducted on COVID patient, but they are our ancillary/support staff (one each of Hospicio & ESI-Covid Hosp n two EMRI services) who shared their hands in an operation called final rites on mortal remains of two Goans martyred in war of Covid virus against human being.”

Further indirectly pointing to the opposition of people from Vasco for final rites, Gaude in his post said when it comes to action on field, society may shy off from their responsibility. “...but as health professionals, we won’t! We care and respect our patient, till the time they are with us, irrespective of whether they alive or dead. My personal gratitude to entire State civil administration, staff of ESI and Hospicio Hospital for their pro-active role in every aspect of fight against COVID-19 including death of COVID patients.”

There was opposition to the bodies of COVID positive persons being taken to Headland Sada, Bogda area for cremation, by the locals as well as Urban Development Minister Milind Naik. Locals strongly stood against the decision to cremate the COVID deceased’s bodies at Bogda cremation ground.

When contacted, local councilor Murari Bandekar said that as per his knowledge there were plans to bring the bodies of the two COVID positive deceased persons and cremate them at Bogda cremation ground.

But on learning about this, Naik and the local people opposed the decision of the local administration and said that they would not allow bodies of COVID deceased persons from other parts of the State at Bogda crematorium.

Bandekar said that Minister Naik also reportedly called Chief Minister Dr Pramod Sawant and informed him about the opposition to cremate the bodies of COVID19 deceased at Bogda.

The local MLA chose to stand with the people instead of convincing them that the burial or cremation, as per the COVID-19 guidelines, was safe.

When contacted the Chief Minister only said that government designated staff will handle the cremation as per the SOP laid down by MoHFW. “The body will not be handed over to the families,” he said.

He, however, made no comment on what happens in case people are opposing cremation or burial.