One found dead, another injured on road at Borda due to midnight accident 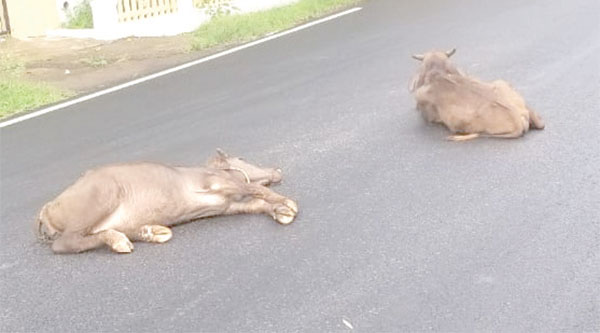 MARGAO: The stray cattle menace once again has come to haunt the Margao residents, as one was found dead and another injured on the road at Borda due to midnight accident, recently.

Strange as it may seem, both the cattle were lying in the middle of the road until Margao Municipal Councillor Vitorino Tavares took a step forward to shift both of them by the roadside.

Tavares had demanded that the municipality should take this issue seriously.  In fact, stray cattle menace has made the congested town roads their second home, with the municipal authorities least interested to crack a whip against the strays. Despite, a cattle pound maintained at the old market area, hardly any stray cattle have been impounded in recent months, with workers entrusted with the cattle pound, utilised for other works.

While the civic body has been finding it difficult to run the dog shelter given the magnitude of the stray dog menace, the cattle pound is almost empty for want of cattle – with stray cattle apparently not on the priority list of the civic babus. At the moment, the cattle impound has turned into a storage room at old market.

As informed by the councillor, he was informed about the death of stray cattle on the road at Borda.

“One of the cattle was found lying dead in the middle of the road. I managed to shift the dead cattle by the side of the road so that traffic movement is not blocked,” he stated.

Tavares said that the issue of stray cattle roaming on town roads posing serious risks to motorists has cropped up yet again. With near-miss accidents occurring on a daily basis, we demand a permanent solution.

“We will bring this issue to the notice of Chairperson and Chief Officer very soon to find out some solution to this menace,” Tavares said.

It is pertinent to note that this issue of stray cattle menace is one of the long pending problems which the public and the commuters are struggling to get rid of. The previous records show that the civic body has completely failed to resolve the issue, and put in place the mechanism in this regard.

On the other hand, the stray cattle continue to create hurdles before the commuters, leading to accidents.  Here in the heart of Margao town stray cattle are an eyesore. These cattle occupy entire roads and footpaths at many places.