Potholes, uneven surface, tar poured into potholes make driving a nightmare; IIT Madras yet to complete report on failure of bitumen to adhere to the bridge 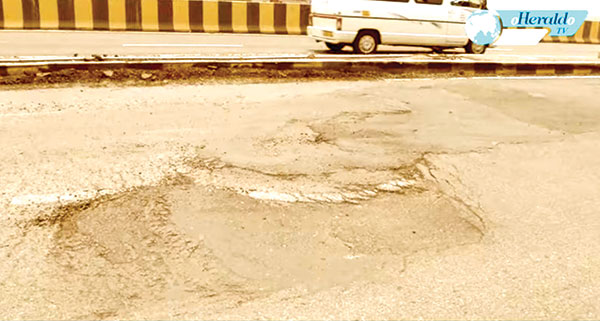 PANJIM: The showpiece of the BJP-led government – the Atal Setu – is replete with potholes. The poor quality of the signature bridge is causing a nightmare to vehicle users as they have to negotiate the potholes while driving on the bridge.

It was from here, while inaugurating it, that the then Chief Minister Manohar Parrikar had shouted to the crowd, “How’s the Josh?” It now appears that vehicle users have to show a lot of josh negotiating the potholes.

When Team Herald went on site to inspect and highlight the condition of the bridge built just a few years ago it found several potholes, uneven surface along the bridge and tar poured into the potholes that has made it difficult for commuters who had hoped for a smooth drive over this bridge.

This is not the first time that the condition and work quality of this bridge has come under question; this has become a regular phenomenon.

As Team Herald was filming the condition of this road, a person from the moving vehicle Ajay said that the newly-constructed third Mandovi bridge, exposes the low quality of work on which crores of rupees were spent. The government must fix accountability for the sub standard work, he said and added that the condition of the bridge exposes the fact that the josh of hurriedly inaugurating the bridge was not in proper posh. He further questioned if this is what the common man gets after paying taxes on time.

Earlier, IIT-Madras, which had been roped in by the Goa State Infrastructure Development Corporation (GSIDC) to study the defects in the 5.1-km long cable-stayed Atal Setu, has requested for four additional core samples. GSIDC will extract the 100mm core samples from the bridge’s tarmac and send them to Chennai for analysis.

Unable to prevent the frequent potholes on the Atal Setu, the State government had turned to IIT-Madras in July last year for answers. A few weeks ago Chief Minister Pramod Sawant had said that the institute would study the reason why the bitumen fails to adhere to the span of the bridge, after which L&T the company that constructed the bridge — will be asked to take corrective measures.

While GSIDC has started interim repairs on the bridge, a permanent solution will be possible only after IIT Madras submits its report and findings.

Recently, at least six vehicles were damaged in accidents on the Atal Setu because of the potholes that mar the bridge.

Given the spate of accidents, it is no surprise that some motorists have decided to avoid the bridge.