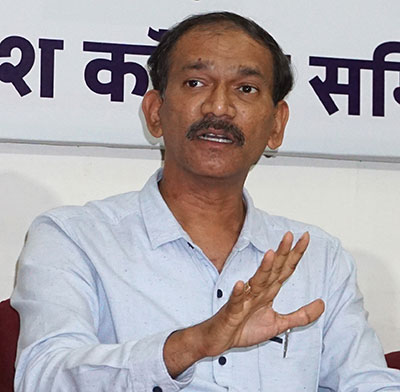 Chodankar also vowed to pursue his complaint against the rebel party MLAs and 53 others for allegedly forging party documents.

Referring to the appeal filed in the High Court challenging the Goa Assembly Speaker’s order dismissing his disqualification petition, Chodankar said that it was incorrect that he was not serious in pursuing the appeal.

“The fact is that our matter was listed first and when it came up before the special bench on Wednesday Adv Sibal was busy with another important matter in the Supreme Court which continued little longer. My lawyer had asked for some time so that our senior counsel Sibal could join through video conferencing. But since there were only three matters before the special bench our matter was postponed for the next week,” he said.

Chodankar further said that he is confident that he will get justice in the High Court. “Our matter is before the special bench which has hardly four to five cases. Our matter will be heard on a weekly basis and it will be decided within the next two months. I am confident that I will get justice in the High Court because only six months are remaining for the next Assembly elections.”

Chodankar also denied that Sibal’s absence had anything to do with the so-called G-23 Congress leaders, who are posing a direct challenge to Gandhi family.

The Congress president said that his second complaint seeking to register a FIR against 10 rebel MLAs and 53 others for committing forgery will continue whether they remain legislators or not because it a matter of forgery.

“I am thankful that the matter has now been referred to the designated special court, which will hear only matters related to elected MLAs and MPs. Forgery is an open and shut case. The then Panjim Block Congress president Prasad Amonkar, who joined BJP on January 5, 2019 is the proposer of the merger, which took place on August 10, 2018,” he said.

When it was brought to his notice that the rebel MLAs can contest the next elections even if they are disqualified by the court as it happened in Karnataka, Chodankar said that he will wait for the court decision.