Aldona MLA Adv Carlos Alvares Ferreira said that the government has a one-point agenda to bulldoze and get things done by all means. 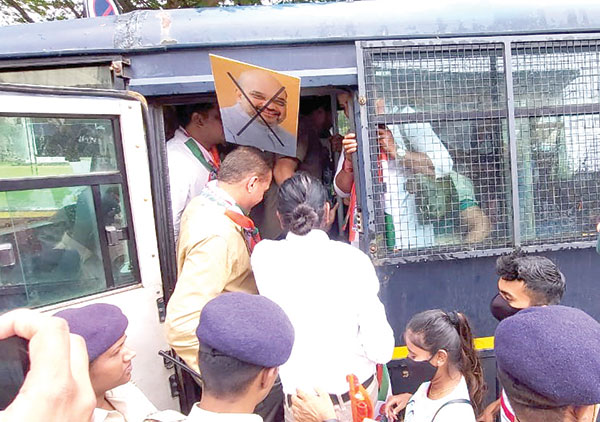 PANJIM: Congress leaders were detained by the police during a protest over the price rise in the city on Friday.

The police detained Goa Pradesh Congress Committee (GPCC) President Amit Patkar, Goa Pradesh Mahila Congress President Beena Naik and others while they were protesting against the Centre over price rises and rising unemployment.

Aldona MLA Adv Carlos Alvares Ferreira, who was the only MLA who participated in the protest alleged that the BJP-led government is out to silence those who voice their opposition, while the common man reels under inflation and the price rise.

Ferreira said that the government has a one-point agenda to bulldoze and get things done by all means.

“The government is trying to silence those who voice their opposition. They are threatening people. The moment you speak out, the ED and CBI hound you. This is not democracy. Such things never happened during the days of the Congress. No one was threatened, and no one was put behind bars. People protested on the streets, and the Congress government at times accepted certain demands and even rolled back some decisions," he said.

“The MLA pointed out that the people are afraid to protest despite the increase in essential items. This was not the situation during the time of Congress rule,” he added.