Cites instances like Mhadei diversion, while questioning why K’taka’s interest always prevails over that of Goa 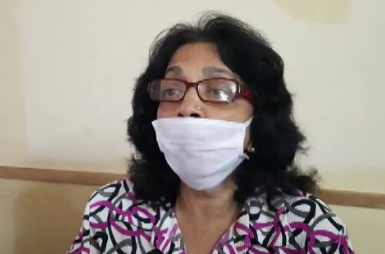 VASCO: Cortalim MLA Alina Saldhana expressed surprise over the statement of the Union Minister of State (MoS) for Railways Suresh Angadi who had earlier enumerated the benefits the State of Karnataka will receive due to doubling of South Western Railway (SWR) tracks.

In a statement issued on Tuesday, Saldanha said what the Railways MoS was right about speaking about how this is advantageous for Karnataka alone, ‘as the neighbouring State needs this development and its size can definitely accommodate this and much more, given that the state being 51.8 times longer in comparison to Goa’.

She added, “However, in his statement, the Minister makes no mention whatsoever of the adverse effects, this project will have upon the tiny state of Goa. It is high time our elected representatives learn from their counterparts in the other states how to ensure the welfare of the State they represent and that of the people who have elected them to power.”

“If connectivity is the main benefit, then the existing track, which is presently underutilized is more than adequate for the needs of the dot sized state of Goa, as the people of Goa hardly travel by rail on this route. If coal transportation is the main reason for doubling, which it is, then it is clear that the Government of Goa does not care for the very same people who have elected it to power as this pollution will eventually lead to destruction of people’s health,” she continued.

Commenting on other statewide issues, Saldhana said, "I cannot fathom why the interest of Karnataka always prevails over the interest of the tiny State of Goa, whether it is the issue of diversion of the Mhadei river water in spite of the fact that Karnataka has seven fresh water rivers or whether it is the widening of the National Highway 4A, wherein Karnataka has objected and prevented the broadening in the Karnataka sector while the Goa Government has given the go ahead signal irrespective of the massive destruction of trees, endemic species of flora and fauna and the livelihoods of the people living within the Wildlife Sanctuary and the National Park".

On a concluding note she said, “It is high time the elected representatives of the people of the State of Goa come up with alternatives, both for connectivity and transportation of coal. Goa cannot be used as a corridor for the benefit of the bigger states. It is the duty of every elected member to protect the State he/she represents irrespective of whether the MLA is in the ruling or in the opposition’.