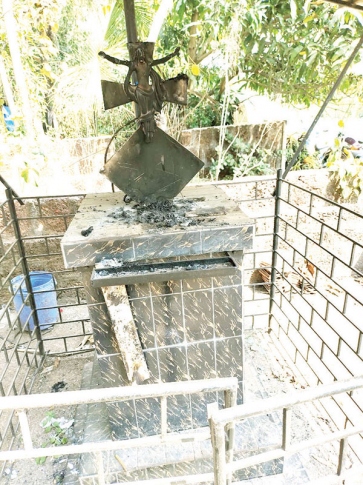 CURCHOREM: Some unknown source tried to harm religious cross, putting fire at it, at Cacumoddi Curchorem on Sunday midnight apparently to hurt the religious integrity of local people at Cacumoddi Xeldem. This however brought together both local Christians and Hindus near the cross.

Flaviono Baretto, a local of a cacumoddi and also a member of Holy Cross chapel said that this is a sad incident to try creating communal disharmony in the village. “Our chapel committee tried to calm down the situation but if local representatives and authority do not act upon this issue that hurt religious sentiment and not safeguard the village security then it will create problems in future,” he said.

Local panch Maria Fernades told that this incident happened due to lack of discipline by the wine wholesaler, whose shop is in the building premise where this private religious cross is situated.

Local villagers too blamed the wine wholesaler for not following rulers and regulations properly assuming it to be the cause of incident, and Fernandes added that drinker should not be allowed to drink open in the premise.

Zilla panchayat member Siddhartha Desai expressing his dismay on the incident, said, “In this area all Hindus, Christians, Muslims live together without difference following religious harmony. This is not issue of one religion. If it happens to any other religion also authorities should interfere to keep harmony in the village.”

As it happened in the border of Xeldem panachayat  and Curchorem Cacora Municipality so both panchayat panch and  ex-councilor was present in the gathering for protest, “I already spoken to the curchorem police and local representative and Power Minister Nilesh Cabral and they given assurance that action will be taken on  those who tried create religious issue in the village and patrolling will be done continously who to maintained displined in night time,” said ex-councilor Vishwas Desai.