Second Goan Konkani writer to be honoured with highest literature honour; Says he hopes it will motivate the Konkani movement 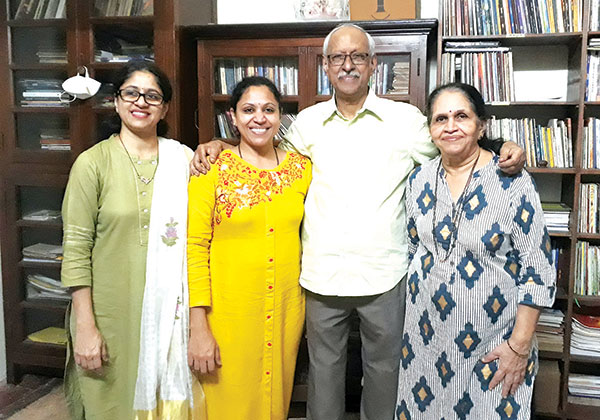 MARGAO: Renowned Konkani short story writer and novelist Damodar Mauzo has been honoured with the prestigious Jnanpith Award which is considered the highest honour in literature in India. He becomes the second Konkani writer after late Ravindra Kelekar to win this award.

Speaking to Herald, Mauzo expressed joy and stated that the Konkani language and the Konkani community spread all over the country have won yet another achievement through this award, as he also stressed on translation of Konkani literature in other languages.

“I know the value and importance of this Jnanpith award. First and foremost I was in total shock after hearing the news from the officials of Bharatiya Jnanpith, as I had never imagined nor I had any expectations of this prestigious award,” Mauzo said.

He added that he is happier because this award is not related to politics.

“We must keep in mind that Konkani was not considered as a language of literature till 1961. However, Goa witnessed major developments of the Konkani language after Liberation. It is a proud moment for the whole Konkani community that this language has won two Jnanpith Awards in a short span of time,” Mauzo said.

According to him this achievement will definitely motivate the Konkani movement and those who are in the field of literature.

“New Konkani writers who are in the field of literature should keep in mind that the literature will never go waste. Writers need to focus on learning other languages also, so that their literature gets translated,” Mauzo said.

He appealed to the student community doing MA in Konkani to not only depend on one language but try to learn other languages, besides writers should learn and adopt new trends in literature at the international level.

Several personalities from all corners including literature, politics, besides social activists  congratulated Mauzo for winning this prestigious award.

Mauzo, also an activist had spoken against the ‘shrinking’ freedom of expression in India following the murder of MM Kalburgi in 2015. The Karnataka police had found that his life was under threat during the investigations in the murder of Gauri Lankesh.

Mauzo is co-founder and co-curator of the Goa Arts and Literary Festival and has several awards to his credit. He is the recipient of Katha Award for Creative Fiction 1998, the Best Dialogues Award at the Goa State Film Festival 1997, the Goa Kala Academy Award and Konkani Bhasha Mandal Award.

He was also awarded a Senior Fellowship of the Ministry of Culture, Government of India for 2011-2012 and had won the Vimala V Pai Vishwa Konkani Sahitya Puraskar award for his novel Tsunami Simon in 2011. His collection of short stories Teresa's Man and Other Stories from Goa was nominated for the Frank O’Connor International award in 2015. He has served as a member of the executive board, General Council, as well as the finance committee of the Sahitya Akademi.