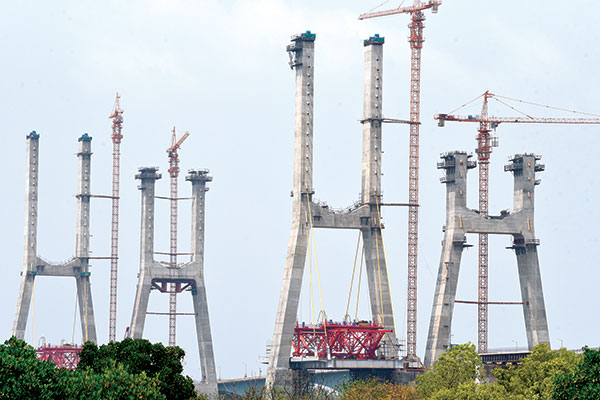 PANJIM: If deadlines are met, traffic delays on the Panjim-Margo route could end by Liberation Day this year. The four-lane section of the signature Zuari bridge is likely to be thrown open for vehicular traffic from December 19 this year even as the work was delayed due to COVID-19 pandemic.

Also, the ongoing works of the widening of the National Highway-66 from Patradevi to Agassaim in North Goa district will be completed by June next year. 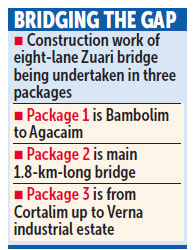 The construction work of the new eight-lane Zuari bridge is being undertaken in three packages of Zuari bridge. They are from Bambolim to Agacaim package 1 of Zuari bridge; main 1.8-km-long bridge and from Cortalim upto Verna industrial estate as package 3 of Zuari bridge. All these works are expected to be completed by May next year while, efforts are to commission one of the four-lane sections of the bridge on Liberation Day this year, sources in the PWD said.

The work of the four-lane section was earlier scheduled to be completed by December last but was delayed due to the COVID-19 pandemic and also due to large chunk of construction workers heading to their home towns. The new Zuari bridge is being constructed by Dilip Buildcon Limited of Bhopal, Madhya Pradesh.

Similarly, the ongoing work of widening of the National Highway-66 (formerly NH-17) are also being undertaken by the Ministry of Road Transport and Highways (MoRTH), New Delhi in two packages. The first package is from Patradevi to Karaswada stretch while, the second package is from Karaswada to Bambolim. Both these works are on and will be completed by June next year, informed a PWD official.

The signature Zuari bridge will also sport two revolving towers at both ends of the bridge even as the proposal is still in the nascent stage. It was the desire of the Union Road Transport and Highways Minister Nitin Gadkari to construct a 125-metre tall revolving towers on the lines of Eiffil Tower of Paris and make it an international tourist attraction in the touristic State. There is also provision for restaurants, amusement parks and other facilities, the official said.