Despite protests, land for IIT demarcated at Shel-Melauli

Massive police force stopped by 200-odd locals, who reiterated that they will not part with their land; Angry mob tried to stop the land survey officers, who completed the demarcation process 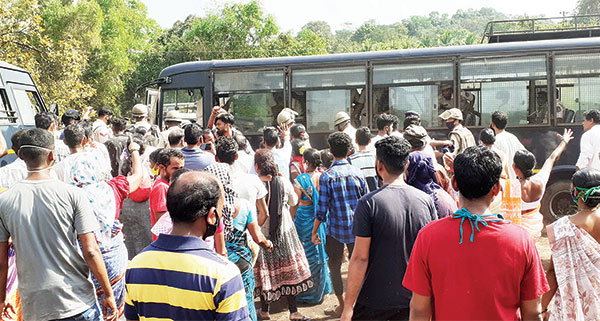 VALPOI: Despite threats of arrest, several hundred villagers of Shel-Melauli continued their protest against the proposed IIT project in the village. However, the State government went ahead and finally completed the process of demarcating the land for the proposed project at Shel-Melauli.

Villagers put up saffron flags and lit a torch (mashal), symbolic to the revolution at the entrance of the village and continued blocking the road.

Several women also marched towards the nearby bars and forced the owners to shut them down. Three bars were shut down by the women, asking their owners to join the protest.

On Tuesday, a huge force of policemen descended at Shel-Melauli only to be stopped by a 200-odd crowd of locals, mostly women, who reiterated that they will not part with their land for the project.

A senior police officer said the teams were brought to Sattari to avoid the villagers from stopping the State Land Survey Department officers to demarcate the land for the IIT project.

The villagers continued their protest during the day stopping the team from demarcation. “The situation turned tense when villagers realised that they were kept busy at the protest site and some of the survey officers had already completed their work by entering through the forest road,” said a protestor.

The angry mob of villagers tried to stop the officers, who had completed their process of demarcation.

Witnesses said, “There were minor clashes between the villagers and the police force in the afternoon when the land survey officers had already left the scene.”

“The demarcation was done without our consent. We do not recognise such a process,” said Nikita Naik, a protestor.

She added, “The villagers have been protesting peacefully till now, but the time has come that we need to be more aggressive, to save our land.”