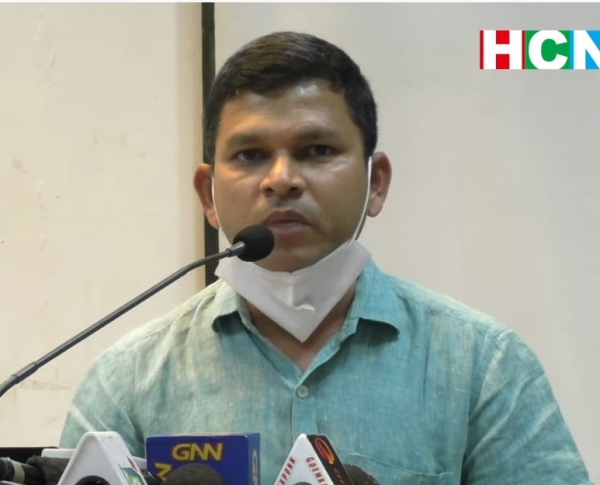 PANJIM: Almost a year after he withdrew his support to the BJP-led government, Sanguem Independent MLA Prasad Gaonkar announced that he will be supporting All India Trinamool Congress (TMC) for the  forthcoming Assembly elections. He is the likely TMC candidate from Sanguem.

He is the second MLA to “support TMC”, after the high profile joining of Luizinho Faleiro in Kolkata in September 29.

Gaonkar, a prominent ST leader and a son of a farmer, confirmed he is not resigning as MLA now, was speaking at a media briefing along with TMC MP Derek O’Brien and Faleiro.

While Gaonkar has not officially joined the party, his brother Sandesh Sashikant Gaonkar and their supporters, including elected panchayat members, joined TMC on Wednesday.

Earlier, Sandesh and hundred supporters resigned from Congress, the party they had joined in July.

Gaonkar, asked about his decision not to join Congress, lamented that the party had failed to grab the mindset of the people in their fight against the BJP. He said he believes that the West Bengal Chief Minister Mamata Banerjee can make a difference and along with fellow Goans, they can bring about a much-needed change in Goa.

Gaonkar went on to criticise the BJP government for the bad state of affairs in Goa and said the common Goan has been neglected. The MLA said issues of local communities like o the ST and farmers need to be highlighted and addressed.

He added that following discussions with TMC leaders and O’Brien in Goa on Goa-centric issues, he was convinced with the philosophy of the Banerjee-led party and that there will be a new dawn in Goa. “There is a need to be united to defeat the BJP,” Gaonkar said. He also opined that there is no High Command culture with this national party.

O’Brien concurred with Gaonkar and reiterated that there will be no high command culture. “TMC in Goa will be a party of Goans, by Goans and of Goans,” he said.

Faleiro then elaborated that TMC is in the process of listening to the views of the people, understanding their aspirations and demands. “The State government is in a financial death trap. There are massive loans to be repaid and this comes at a time when there is an economic crisis in the State. Unemployment is high in Goa, especially amongst the talented and qualified youth,” Faleiro said.

Speaking on Gaonkar, Faleiro pointed out that the Sanguem MLA is a son of a farmer and that TMC is proud of farmers in Goa and all the hard work they put in. He claimed that the Centre has destroyed the livelihoods of farmers in the country.

He then praised the value of Sanguem, calling the taluka a cradle of Goa’s identity and natural resources.

He added that the message of Goa’s farmers and ST community will now be strengthened following the inclusion of Gaonkar and his supporters into TMC. “The only alternative to the BJP is TMC that can defeat the Modi juggernaut,” Faleiro said. He then listed various issues that the Centre has failed on, such as rising fuel prices.

O’Brien highlighted how TMC has been opposing the anti-people policies of the BJP’s central government.

Responding to queries, Faleiro and O’Brien said that the party in Goa will have a strong women representation, which can be reflected in the 41 per cent women membership of TMC.

While Faleiro stated that women leaders will join TMC soon, he did not give exact figures when asked for details on membership of TMC in Goa. He added that it’s a good sign that a large number of people are joining TMC.

O’Brien pointed out that it is not just politicians who are joining but people from all walks of life, such as

Asked when TMC Goa will announce their officer bearers, Faleiro said they are working on that and it would be announced soon. O’Brien added that the party will be opening their Goa office shortly.

O’Brien also said that unlike the BJP which tries to proclaim itself to be a ‘perfect’ party, TMC is not perfect and that TMC’s strength is in its humility. He did not respond to queries on plans to explore an alliance with other political parties in Goa.

Meanwhile, there are indications that the Goa Forward Party is inching closer to TMC. Speaking on the side-lines of a function in South Goa on Wednesday GFP president Vijai Sardesai said, “The Congress’ statement in alliances are a dichotomy. Their central and state leaders speak in different voices on alliances after we spoke of the need for Team Goa. That fell on deaf ears. This is a sign that Congress is non-serious to defeat the BJP. The Congress leadership is aligned with the BJP, I make a direct charge. The principal opposition party has not done its job. A new player has come. And this new player is serious about Goan issues. Goa deserves a strong opposition which becomes the ruling. We may see a Navi Sakal after Diwali.” 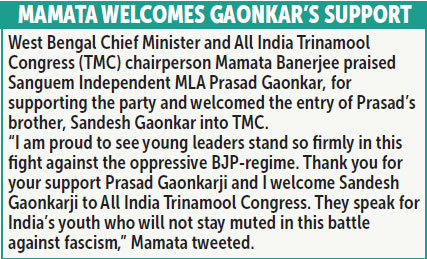