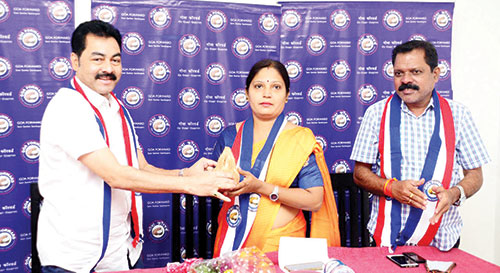 While addressing media persons, Kandolkar  said, “The elections for 2022 may take place early and could be declared at any time.”

“It would be difficult for a candidate to reach out to the voters if he/she is selected at the last moment in case of sudden declaration of elections,” he added.

“The candidate should be given one month’s time for campaigning,” said Khandolkar.

“It is the general feeling of people that if the Opposition wants to defeat BJP then all the Opposition parties should become a Team Goa and unitedly contest the 2022 Assembly elections. For this plan to succeed, it is important declaring candidates as well as forming alliance.”

“Considering the people’s view is in favour of striking an early alliance the other Opposition parties should also take a decision at the earliest. Declaring a candidate will help him/her prepare for election strategies and also establish contact with the voters with door-to-door visit and understanding their problems,” he added.

He further said from the past elections experience and also the recent ZP elections, the other political parties have learnt a lesson and should not wait till the last moment to declare their candidates when they are not even getting sufficient time for their campaign and lose the battle.”

With regard to Ponda Constituency, he said, “Already we have declared Ponda Municipal Council Councillor Venktesh Naik as our candidate for Ponda and that if even alliance with Congress or other parties is formed we would not compromise for the Ponda seat.”

He said, “Out of four constituencies in Ponda Taluka we are thinking to contest on two seats.”

Another blow to Ponda BJP is the resignation of PMC Councillor Chandrakala Naik and joining to Goa Forwar Party.

Chandrakala said that though she was Mandal Secretary of BJP at Ponda she was not taken into confidence while conducting party works in Ponda.