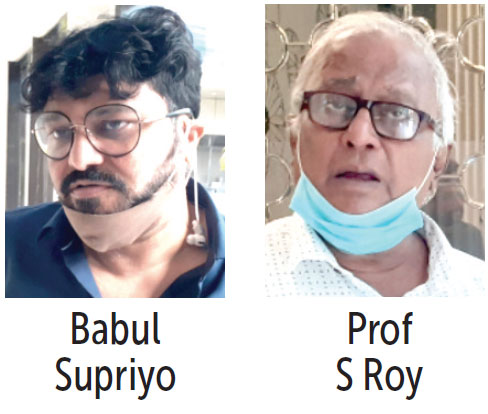 The MPs along another young colleague the fiery Mohua Moitra, MP, will be present at the launch of TMC’s charge-sheet against the Goa BJP government on Monday (today)

Speaking to Herald in an exclusive chat he revealed something else he had packed for this trip, his football boots. The singer is crazy about football, and in his short stay here, he plans to stop and play a bit. His friend Alvito D’Cunha will give him company (See box)

Asked about his resignation after seven years as Union Minister in the Narendra Modi Cabinet and now campaigning in Goa against the BJP and Modi, the former Asansol MP said, "I'm doing what I feel is right. It's not about Modiji. It's about what's good for Goa and who can deliver the goods for Goa."  He opined that a lot more could be done for Goa. A lot more will be done for Goa, under the leadership of TMC Chairperson and West Bengal Chief Minister Mamata Bannerjee, Supriyo added.

"Whatever I have done at a certain point of time, I have done with all my heart. If I have done BJP, I think everyone will agree, I did my best, whether in West Bengal, I did my best in the ministry as well," he asserted. Now that I have shifted parties, I have done it with the morality of resigning from BJP and it was very nice of Mamata didi to ask me to work for Bengal and be part of her team.

Speaking to Herald in his hotel in Candolim, he said "Goa should see a lot more development to make it tourist friendly. I genuinely believe that Goa is no less than Maldives, Bali or Mauritius, be it of culture, be it tradition, be it music or the wonderful beaches we have here. A lot more can be done and you will see a new dawn. It is an important election and Trinamool Congress will do very well (here)."

After being in the rough and tumble of back breaking elections in a large State such as West Bengal and asked if Goa would be a fun place to campaign, TMC leader Babul Supriyo said, "You will see what I speak, when I campaign. It is about what Goa deserves. Goa is no less than any of the top tourist destinations, any which way."

TMC Lok Sabha MP Prof Saugata Roy, who represents the Dum Dum Constituency, said, this was not his first trip to Goa. He narrated that he had come to Goa first as a tourist, and then as a Member of the Defence Consultative Committee, when late Manohar Parrikar was Defence Minister.

Asked about TMC's foray into Goa and how Goa fitted into the TMC scheme of things Prof Roy, who is a retired professor of physics from Ashutosh College disclosed to Herald, "Goa is part of TMC's expansion plan. First we made a foray into Tripura, then Goa. Next we plan to go to Meghalaya, then UP."