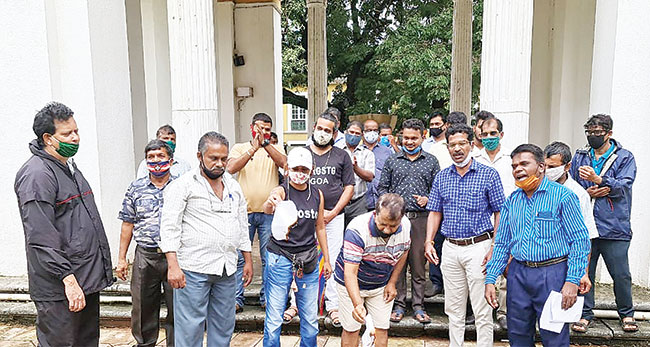 Urge CM to take a stand in the interest of the agriculture sector; Question silence of the two BJP MPs on the bills, which they said are anti-farmer and anti-Bahujan samaj

PANJIM: While the BJP-led State government has hailed farm Bills, calling it out as a “revolutionary”, the farmers in Goa, joined the nationwide protest on Tuesday and burnt copies of the bills, alleging that the legislations are a “death warrant” and will destroy their livelihood. The farmers have urged Chief Minister Pramod Sawant to take a stand in the interest of the agriculture sector.

The farmers have their reservation on the provisions regarding the Minimum Support Price (MSP) and contract farming. While they fear that they will be denied the MSP they get for their produce when the three Bills come into effect; the farmers have also demanded for the deletion of the contract farming clause.

The three legislations -- Farmers' Produce Trade And Commerce (Promotion And Facilitation) Bill; the Farmers (Empowerment and Protection) Agreement on Price Assurance and Farm Services Bill; and Essential Commodities (Amendment) Bill-- were passed by the Lok Sabha and Rajya Sabha, amidst severe protest by the opposition benches.

The Bodgeshwar Xetkari Sangathan, All Goa Tennant Association and All Goa Kul Mundkar Association on Tuesday held a protest against the ‘anti-farmers bill’ at Azad Maidan. The farmers have threatened to intensify their protest via a State-wide agitation, if the State government fails to take a stand in their interest.

The Bodgeshwar Xetkari Sangathan President Sanjay Barde said that the farmers have expressed apprehensions that the three bills will pave a way for dismantling the MSP system thereby leaving them at the mercy of big corporates, who in the name of contract farming, will privatise the entire agriculture sector in Goa.

“Not one of the three Bills has even the mention of MSP neither it talks about the Maximum support price to the farmers. If the government cannot assure MSP, it will be disastrous for us as, the corporates will get a chance to set the prices for our produce. So where do we farmers stand? Our land, our produce and the price will be decided by the corporates?” he questioned.

Raising apprehension about contract farming, Barde demanded that the clause be immediately deleted in the interest of small-marginal farmers.

“We farmers do not want to get into a contract with a corporation as it gives them a chance to dictate the prices. Also, the legal challenges are too many. Why should I give away agricultural land to a private party? The Government should work out a policy to help the farmers with their own land without any other interventions,” he demanded.

Another protesting farmer said that the Bills are death warrants for them and have no clarity on assured MSP. “We have seen in other parts of the country how poor farmers are forced to sell their land to private players. In Goa also, in the name of contract farming, the agricultural fields will be taken over, leaving the farmers poor,” the farmer said.

The protestors have urged the Chief Minister to make his government’s stand clear on the Bills and come out in support of farmers, who are currently serving as a backbone of the State economy. “BJP will have to face the hit in the coming assembly election. This is a warning,” farmers said as they shouted out slogans condemning Prime Minister Narendra Modi and the State BJP government.

The farmers also questioned the silence of Union Minister for Ayush and North Goa MP Shripad Naik and Rajya Sabha MP Vinay Tendulkar over the passing of farm bills, which they described to be anti-farmer and anti-Bahujan samaj.