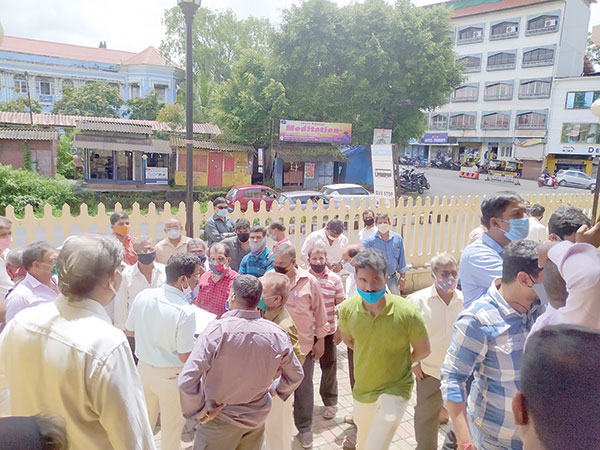 MAPUSA: Shri Bodgeshwar Xetkari Sangh along with farmers from surrounding villages of Verla Canca, Tivim, Camurlim and others marched to the Mapusa Municipal Council demanding that their names be restored on the draft Land Use Map and Register.

The delegation also demanded that the NGPDA clarify on the deletion of names of 1,300 farmers from Mapusa and accused the authority of doing so on purpose.

"Deletion of names of the farmers from the register is a crime and this government is cheating the farmers. Since 1970, these farmers are registered as tenants. However, the names of the landlords are mentioned but not of the tenants", Barde claimed.

Barde threatened to make it an all Goa issue if the authorities fail to restore names of all the farmers on the register.

Meanwhile, the MMC chairperson said the PDA is not an authority to delete names of the farmers. Also it is a draft plan and not a final one. The plan is displayed for objections and suggestions and based on these the changes can be made.

"The Mapusa municipality is only the nodal department which is the link in between. Also PDA has no authority to remove names. Anyone who has any objections should approach the concerned department. I have told the delegation to prepare a list of farmers whose names are missing. It will be forwarded to the member secretary for necessary rectification", Braganza added.