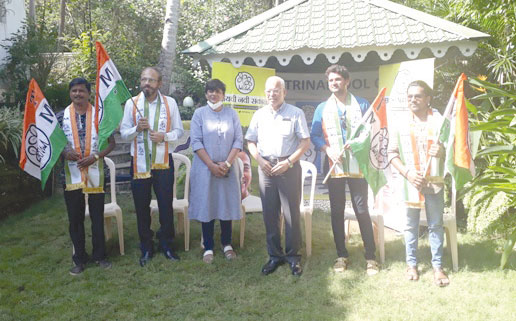 MARGAO: In a major jolt to Congress Block in Fatorda, few office-bearers of the party along with leading industrialist Joseph Mathew joined Trinamool Congress (TMC), on Thursday.

TMC Rajya Sabha member Luizinho Faleiro in the presence of Ethel Lobo welcomed them into the party wholeheartedly.

Azaan Shaikh, vice-president; Akhansh PG, secretary and Manuel Oliveira, yet another block vice-president, who has been associated with the Congress for the past 15 years amongst the others, joined the TMC.

Speaking to the media persons, Faleiro said the joining of these youth leaders will surely strengthen TMC in Fatorda, as they have majorities to play in upcoming elections.

He further assured that the TMC will promote the industrialists and owners of small scale enterprises in order to restart their businesses.