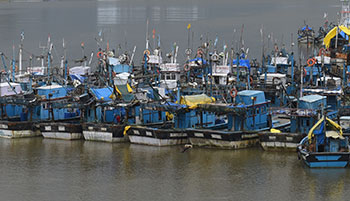 PANJIM: Nearly 1500 mechanised trawlers continued to remain anchored though the fishing season officially kicked off on Saturday. Labour shortage coupled with weather warnings kept trawlers at the jetties, even as the 47-day fishing ban period, which came into force from June 15, ended at midnight on July 31.

All Goa Purse Seiners Boat Owners Association president Harshad Dhond said that no trawlers ventured in the sea on Saturday. “Majority of skilled labourers workers at the jetty are from Karnataka and unskilled are from Jharkhand and Orissa. They had left the State soon after the fishing season ended. But now due to COVID scare they are stuck in their native places,” Dhond said.

He explained that since there is no mode of transportation for the labourers to return, the association was looking forward to get them through private modes of transport but the cost is high. “Also, government charges Rs 2000 for a swab test, which is also not affordable for us,” the trawler owner said.

Dhond said that the Association will write to Chief Minister Dr Pramod Sawant on Monday, demanding that they do away with swab testing charges for the labourers and kiosks be set up at jetties for community testing.

“We will also demand that KTC buses be provided to us to ferry the labourers from their native places,” he said.

Further, the Indian Meteorological Department (IMD) Goa Observatory has warned fishermen against venturing into the sea till August 5 due to rough sea condition.