Fishermen led by Vinay Tari, the Chairman of the Cutbona-based Fisheries Cooperative Society, pointed out that they are now again facing navigation problems due to the hostile conditions at the mouth of the River Sal. 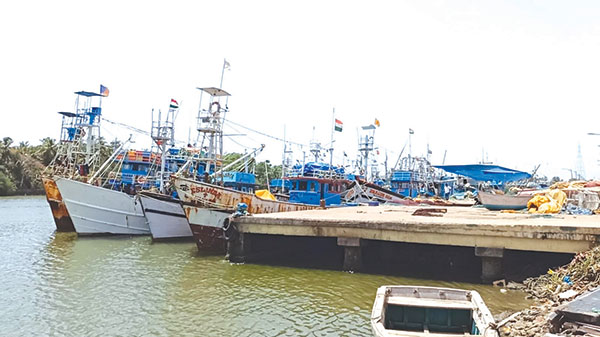 MARGAO: Further complicating the issue of the sand bar creating an obstruction for fishing trawlers at the mouth of the River Sal, local fishermen have vowed to strongly oppose the State government’s plans of dredging this sand bar, demanding a permanent solution instead.

Herald had recently reported the situation of boat owners at Cutbona Jetty, who were unable to venture out to sea even after the seasonal fishing ban was lifted, due to the sand bar blocking their navigational channel.

The traditional fishermen who hail from Bapsora, Betul and Rangalli who had gathered near a temple in Betul, said that instead of the government’s last-minute stop-gap measure, their long-pending demand for the construction of a breakwater facility should be implemented first.

While Velim MLA Cruz Silva had earlier approached the Captain of Ports (CoP) on behalf of the Cutbona trawler owners given that a majority of the trawlers were unable to head out into the sea, the CoP had agreed to dredge the sand bar so as to open up the blocked navigational channel.

However, the fishermen led by Vinay Tari, the Chairman of the Cutbona-based Fisheries Cooperative Society, pointed out that they have faced the same problem in the past as well, and are now again facing navigation problems due to the hostile conditions at the mouth of the River Sal.

“We are not against the plan to remove the sand bar, but we urge the government to implement a more permanent, like a breakwater facility to restore the channel. Otherwise, this will be a recurring issue every year. Issues like this cannot be resolved by stop-gap measures,” said Tari.

“We had conveyed our stand to Fisheries Minister Nilkanth Halarnkar when he had visited Betul earlier. Our livelihoods are at stake too and our fishing business has been badly affected due to the rough navigation conditions at the mouth of River Sal,” he added.