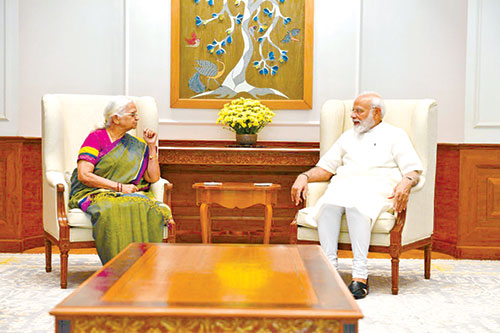 Sinha, 77, who was from Bihar and was associated with the Jana Sangh and then the BJP, died here at the All India Institute of Medical Sciences (AIIMS).

Condoling her demise, Kovind, in a tweet, said she was an excellent writer and teacher who deeply understood the cultural life and local traditions of the country, especially of Bihar.

In his message, Naidu said, "Deeply saddened to learn about the passing away of Smt. Mridula Sinha, former governor of Goa. She was an accomplished writer and a distinguished administrator. Her death is a huge loss to literary world. My heartfelt condolences to the bereaved family members. Om Shanti!"

Expressing grief, Modi said, "Smt. Mridula Sinha Ji will be remembered for her efforts towards public service. She was also a proficient writer, making extensive contributions to the world of literature as well as culture. Anguished by her demise. Condolences to her family and admirers. Om Shanti."

Sinha was also a former head of the BJP's 'Mahila Morcha' (woman wing) and remained its executive member before being appointed Goa governor in 2014.

BJP president J P Nadda described her demise as an irreparable loss for the party.

Union Home Minister Amit Shah said she worked for the nation, society and the party throughout her life, and will also be remembered for her writing.

In his condolence message, veteran BJP leader L K Advani said she was an inspiration to many.

“She dedicated her life to the service of the nation, party and the society while championing the cause of women empowerment, upliftment of the underprivileged and weaker sections of the society. Also a prolific writer, Mridula ji wrote many thought-provoking books and contributed greatly to the world of literature," Advani noted.

"Mridula ji was a fine human being. She touched everyone with her warmth and compassionate nature and it was always a pleasure to meet her. She was very kind to host me along with my family at the Goa Raj Bhawan in January 2019, and we spent a memorable week with her and her family," he said.