Freight terminal at Assolda only over my dead body, vows Cabral

MARGAO: Curchorem MLA Nilesh Cabral has unequivocally said he was opposed to the development of a rail freight terminal as proposed by Fomentos in the villages of Assolda and Xelvona. 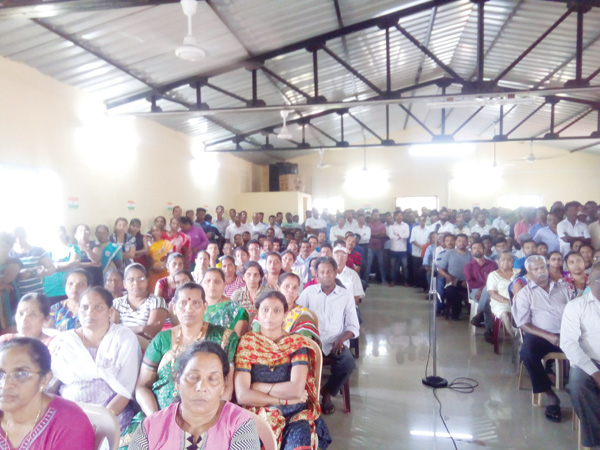 MARGAO: Curchorem MLA Nilesh Cabral has unequivocally said he was opposed to the development of a rail freight terminal as proposed by Fomentos in the villages of Assolda and Xelvona. “This project will come up only over my dead body,” he said addressing the special gram sabha at Assolda on Sunday.
The NGT vide its order last year had directed the Goa State Pollution Control Board to hear the panchayat, villagers and the project proponent and decide upon the matter with a rider that the project proponent give the details of the entire project in both phases and not split it into two phases as done earlier while applying for the pre-environment clearance.
While the Environment Impact Assessment Authority at its meeting held on September 6, 2017 has suspended the pre-environment assessment issued in 2015 till such time as the company gives a detailed project report to it and also to the panchayat.
“The licence is suspended as if it was revoked the project proponent would have gone to some court and got a stay on grounds that he was not given a hearing,” explained Nilesh while assuring the people that he would continue to get the assessment revoked as soon as possible after the authority hears all parties.
He however disagreed with a villager Piety Fernandes who said the double tracking of the railways was to help coal transportation. “Double tracking of railways is a national project and it is completed in most parts outside Goa and is now being taken up in Goa in the first phase,” he explained.
He however, reiterated that he would not allow the Fomentos to set up a multi cargo freight handling terminal in Assolda including transportation of coal. His statements were welcomed with a loud applause by the nearly 400 people present for the gram sabha.
Earlier, the Deputy Sarpanch Anthony Fernandes told the villagers that the panchayat has not issued any licence or permission to Fomentos or the railways for any work in the village. However, Nilesh explained that the railways did not need permission or licence from the panchayat to carry out their double tracking.
While Anthony proposed to elect a standing committee to pursue the matter with two members from each ward, the proposal was lost in the assurance given by the MLA that he would oppose the project lock, stock and barrel.
Panchayat member Manoj Naik recalled the history of the people’s agitation against the project from 2015 when they first came to know about it through media reports, the battle before the NGT and following the NGT order, pursuing with the Goa State Pollution Control Board.
Defending the panchayat, he also disclosed that some villagers had already signed the consent term with the railways and also received money for the sale of their land for double tracking.
However, Nilesh’s assertive statement silenced many who before his arrival even questioned his opposition to the project.
Related news