MARGAO: Pointing out that the extension period between the two doses of COVID vaccination would adversely affect the seafarers’ itinerary, the Goan Seamen Association of India (GSAI) on Saturday appealed to the State government to stick to the original time gap at least for the seafarers, who have already taken the first dose.

President Frank Viegas stated that while the earlier gap between the two doses was nearly 6 to 8 weeks the same has now been changed to 12 to 16 weeks, which he said will cause a problem for the seafarers, who do not receive the second dose as they will not be able to join their ship. 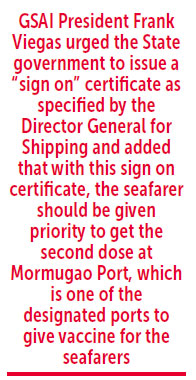 He urged the State government to issue a “sign on” certificate as specified by the Director General for Shipping and added that with this sign on certificate, the seafarer should be given priority to get the second dose at Mormugao Port, which is one of the designated ports to give vaccine for the seafarers.

“Charterers are opting only for ships having a safe crew and hence non vaccinated seafarers are not taken onboard and hence the difficulties faced by Goan seafarers would increase manifold. The Goans will lose their jobs to seafarers from China, Bangladesh, Indonesia, etc as in these countries the vaccination has already been completed,” Viegas claimed.

“However, some Goans working for Royal Caribbean International have already joined their vessel where they will be quarantined and also vaccinated. In fact, the company has apparently asked its employees to take the vaccine and assured that if that is not possible, the company will vaccinate them before they join duty on the ship,” he added.