Goa’s per million cases HIGHEST in the country; fatalities at lowest 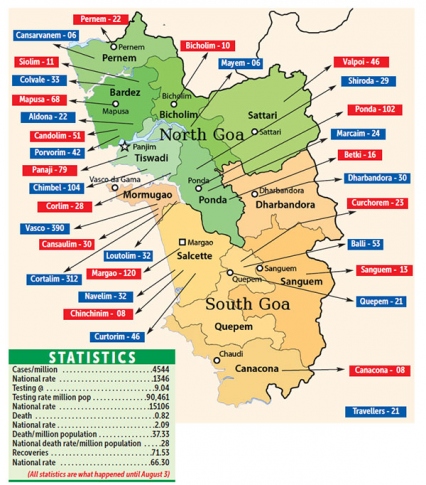 PANJIM: With COVID-19 cases rising at the rate of 250 plus on a consistent basis for the last week or so and also breaching the 300-mark, Goa seems to be staring at fearful days ahead considering the limited health resources available.

As per the statistics on August 3, the State has 6,816 cases which means we have 4,544 cases per million, which is more than three times the national rate of 1,346. The more number of positive cases can be attributed to high number of testing, as Goa had already tested 1,35,692 ,which gives a testing rate 90,461 per million population.

The testing ratio is per million population, which is five times better than the national average of 15,106.

The State has also fared well at the fatalities rate.

While Goa has seen steep rise in fatalities in last one month or so, the State had no deaths till June end which on August 3 had climbed to 56.

With the Centre’s new SOPs allowing discharge of asymptomatic patients after 10 days if they had no fever for three days, the State has also seen rise in recovery rate. Total recoveries in Goa stand at 4,876 as on August 3.

In the last one month, Goa has seen a huge jump in cases as till June 1, 2020, the State, at that point had just 1,387 confirmed cases and four deaths

Interestingly, the number of active cases of travellers has reduced from over 120 to just 21 on August 3. 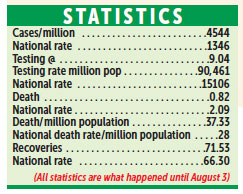 While the situation looks grim for Goa, the Chief Minister Pramod Sawant, Health Minister Vishwajit Rane and the Health Secretary Nila Mohanan are optimistic that the State will rein it in.

“We have the best testing rate, the medical facilities and now, we have begun plasma therapy, which will help in reducing fatalities,” Sawant said.

Rane too said that all the required measures are being taken to bring the pandemic under control.

“Facilities at the COVID ESI Hospital and COVID Care Centres are being ramped up along with testing facilities,” he said.

However, it still seems a nightmare for Goa, which was once in a green zone in early May, and has now clocked nearly 7000 cases.