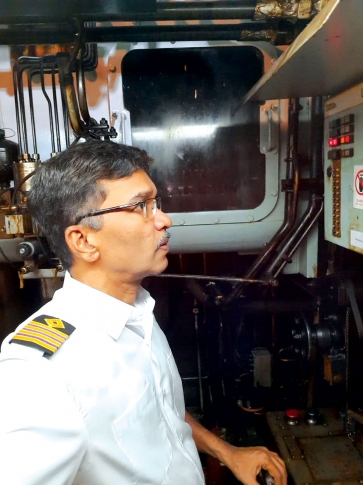 MARGAO: It was a miraculous escape for several Indian crew members, including a Goan on Thursday when MV Norfolk, a merchant navy vessel, got grounded, risking potential environmental disaster in Houston, USA.  However, at this critical juncture, Allwyn Jorge, the Goan Chief Engineer onboard the vessel from Carmona, displayed courage by taking over the command and brought the ship to berth safely at Houston port.

Allwyn Jorge contacted Herald on Thursday evening and informed about the incident in detail.

He said that all the Indian crew members are safe onboard the ship.

The authority at the Houston has appreciated the courageous efforts of Jorge for taking the command of the ship and preventing an environmental disaster from occurring in the US.

Recalling the incident Jorge said, “MV Norfolk, a merchant navy vessel with Indian crew onboard had a miraculous narrow escape after its main engines failed to respond from the Bridge when manoeuvring in a very narrow channel while berthing in Houston port at a time when its Captain collapsed on the Bridge due to shock.”

He said upon the orders from the US pilot he took over the command of the vessel and by manoeuvring the main engines in close quarter situations on emergency controls, and brought the ship to berth safely at Houston port.

“This was the most tense moment of my career at sea when the ship almost ran aground with no response from the Captain of the MV Norfolk as it would have been an environmental disaster  if we had lost control of the vessel and a big setback to Indian seafarers reputation worldwide,” said Jorge.

He said it was a very tense moment for all the crew onboard and a joyful moment when the ship safely berthed in Houston port with US Coast Guard boarding the vessel.