Govt officials on duty are getting emotionally attached; Policemen are giving silent support and the youth have taken this fight in their own hands 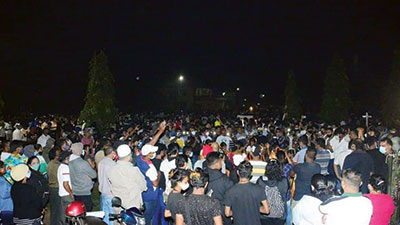 CHANDOR/BORDA: It was past midnight. Multitudes of people, with their mobile torches on, many with just candles sang songs and shouted slogans walking between the Chandor church and the level crossing. The crowd did not just have activists. Or did it just have adults - both young and middle-aged or elderly? There were young children, slowly coming to terms with the reality that beyond their school there’s a fight to be fought, to keep Goa the way it once was.

And this feeling of doing it for the next generation came from within even those who wore the police uniform, on duty to ensure that the people’s movement “doesn’t go out of hand”. And while there was this cruel irony that FIRs were registered against many activists, there were policemen in Chandor who understood the feeling of activists and gave silent but clear support.

At Chandor, policemen put their hands in pockets, silently acknowledging the people’s fight.

At Chandor, wherein people in large numbers gathered at the railway crossing, the Deputy Collector of Margao reached to the spot and went inside the Chandor Police station. The crowd started shouting "Goenche police aamche police" to which some police put their thumbs inside their shirt and pushed ahead in gesture to showcase that they are with the people but are bound by the duty," said Captain Viriato Fernandes, the firebrand leading light of Goencho Avaaz and Goencho Ekvott.

“Some police even urged our members not to disclose this as this might trigger action against this police. This incident also surprised us and we were delighted that our policemen have understood why we are fighting. We have asked them to do their duty and not to worry," revealed the Captain. He further added that this was a defying movement that the government officials on the duty are emotionally getting attached to us.

Goencho Ekvott members and other activists have expressed their happiness that many youths from all parts of Goa are joining their cause and inviting and supporting the people’s movement knowing that their fight and the awareness campaign against the three linear projects - double-tracking of SWR, high transmission power line and the expansion of National Highway 4A - are to protect the nature of Goa for the future generations which are yet to come.

Goencho Ekvott group which is an umbrella group of several social groups across Goa has been actively fighting tooth and nail against three mega projects which they claim are dangerous for the people of Goa, its biodiversity and will have a long term irreversible destructive impact if allowed to proceed, in Goa.

They and the Goyant Kollso Naka have managed to raise the crescendo of people’s opposition to a level where this pure people’s movement is being recognised both nationally and internationally.

Asked about the attachment and affection shown by government officials, Capt Fernandes said their awareness programme against the three linear projects which are destructive has yielded results. “We have been making people aware that this fight is for the betterment of the future generations of their and our own children. Tomorrow our children will question us why we didn’t come forward to protect the nature of Goa, what answers will we give?”

Off the record, many working for the government are emotional about the people’s fight to protect Goa.

“Can the government officials tell their children that there were few right-thinking people who tried to make them aware and protect Goa but they did not support them and instead stopped them from protecting our land?, asked Captain Fernandes. “I question them and many government officials, including policemen, have got emotional”.

At Borda, permission seeking cop goes away, after being told what the fight is all about

The cop was told that this is an awareness program and people are being made aware of how they are going to face severe problems if the destructive projects come to Goa. The policeman left the site and didn’t come back.

In government offices, when activists go to collect RTI then some government personnel go out of the way and provide information in record quick time.

Overwhelming response from the youth at awareness programmes

Antao also added that Goencho Ekvott has received an overwhelming response from the people and especially from the youth from Goa. Our awareness campaign programs have been arranged in several villages and towns of South Goa as well as in North Goa. Youth from various parts contact us to join our movement in large numbers. They show their willingness to join the awareness skit and dance which is programmed by Fr Bolmax Pereira, the Parish priest of Chicalim.

“Once the youth becomes the decisive factor, then the government will have to come on its knees and have to make decisions about what people want. Remember they have voting rights," Antao added.

Messages keeping pouring in appreciating the work of people’s groups

Orville Dourado Rodrigues, Co-Convenor of Villagers Action Committee Against Doubling of South Western Railway Track (VACAD) and a member of Goencho Ekvott said, "Every day I receive messages from the people appreciating our group's work. Many people fearing the repercussions for their open stand against the three linear projects, and are not coming out in open. There are many people especially government employees who are supporting us but are not coming out.”

90% of Goa police with the people’s movement at heart

Rodrigues also added that almost 90 per cent of the Goa police officers are telling us that they are convinced with the cause that Goencho Ekvott is fighting for our future generations to come. All of them are with us, we never confront the police and in fact in Davorlim we had assured police that there won't be any law and order problem from the side of the movement.

“Our movement is a people's movement and I see this as a victory of the people. People have understood that if they don’t support us and our cause to protect Goa by opposing three linear projects, then their children and grandchildren will question them for their inactivity and blame them”, Rodrigues added.