Rich tributes paid to Dr Jack de Sequeira and Shabu Dessai at Opinion Poll Day celebration at Lohia Maidan; 3 MLAs assure to take govt to task at the ensuing Assembly session; Accuse govt of working against the interest of the people 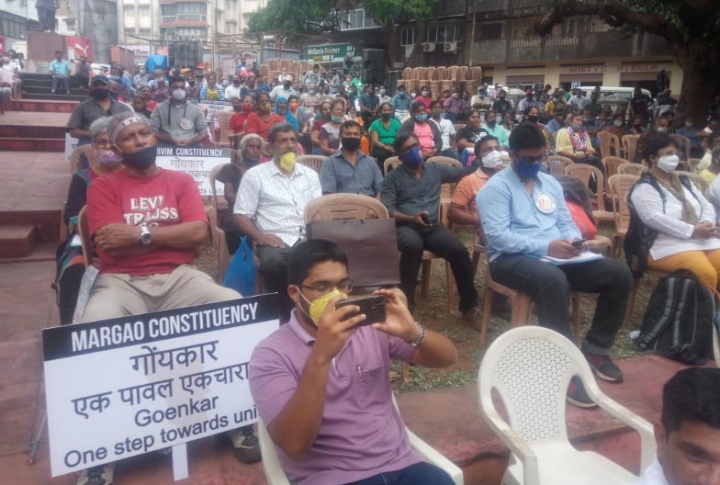 MARGAO:  The speakers at “Goenkar – Ek Pavl Ekcharachem”, the Opinion Poll Day celebration held at Lohia Maidan, Margao on Saturday called upon all Goans to unite and overthrow the anti-people Bharatiya Janata Party-led government in Goa.

The speakers said Goa would not have been what it is today if they did not take the right steps then and stressed the need for a similar movement to liberate Goa from the evil.

The legislators assured that they would take the government to task at the ensuing assembly session and three MLAs namely Digambar Kamat, Vijai Sardesai and Aleixo Reginaldo Lourenco

announced that they had already tabled a private members resolution for discussion.

Accusing the government of working against the interest of the people, Opposition Leader Digambar Kamat recalled how he had scrapped the Special Economic Zones in Goa during his tenure as the Chief Minister by listening to people’s objections adding that it was true democracy.

Vijai Sardesai lamented that two years ago Dodamarg locals resolved to be part of Goa only because a person from their region has become State’s Chief Minister and accused Dr Pramod Sawant of hobnobbing with Prakash Javadekar who allowed Karnataka to divert Mhadei water.

“This traitor chief minister has to be shown the door,” he said, declaring that he would retire from politics instead of aligning with BJP ever in future.

“As I have said for me BJP died the day Manohar Parrikar died,” he said.

Calling for similar meetings in other villages, Vijai threatened to evict the Rail Vikas Nigam Ltd office in Fatorda if the double tracking work is not stopped immediately.

“Manohar had rejected double tracking and road widening and the present government is doing exactly what he did not want,” he charged.

“If the BJP is not voted out of power in Goa, then the little bit of tourism that exists would be finished. I am always with the people and I want the crowd to tell me what is expected and I will do it,” Aleixo Reginaldo Lourenco said.

Nationalist Congress Party president Jose Philip D’Souza said “he is at home” when someone asked where was Churchill Alemao and admitted that he was heckled because of the MLA.

However, he said the NCP will never align with the BJP and added that in Maharashtra it has aligned to form a government only to keep the BJP out.

“My brother died of lung cancer caused by coal and how can I ever think of supporting coal,” he asked and called upon all the forces to unitedly fight against the BJP in Goa.

Capt Viriato via an audio visual presentation explained how the political machinations in Goa have been planned and executed including the defection to pave way for double tracking, road widening and nationalisation of rivers to transport coal.

Independent MLA Prasad Gaonkar termed the chief minister as “Property Sawant”, who looks only at the commission he would get and alleged that all three linear projects are being pushed because of the cut back received by him.

Dr Jorson Fernandes explained the illnesses that can be caused by coal pollution while Zarina da Cunha said the government was lying when it says that tree plantation has been undertaken to replace those cut in the forest areas. “The ones planted are saplings and that too on laterite ground while full-grown trees were cut,” she said.

A toddler Sanchit Naik grabbed everyone’s attention with his fervent appeal to preserve Goa for his sake as the ancestors had saved it for the present generation while, Shubam Shirvolkar from Melauli said their 9-month-old struggle would continue till the land is transferred in the cultivators’ name.

The progamme began with the garlanding of busts of Dr Jack Sequeira and Shabu Dessai by their children and later Dr Sequeira’s grandchildren Ajit Sukhija and Paula Sequeira Pinto along with Vishal Dessai, son of Shabu Dessai and Dr Harischandra Nagvenkar lighted the lamp.

Folk dances, songs, traditional music and even a street play were performed.