Power Minister says it is needed to meet increasing demands; States Goa does not intend to set up a power generating plant 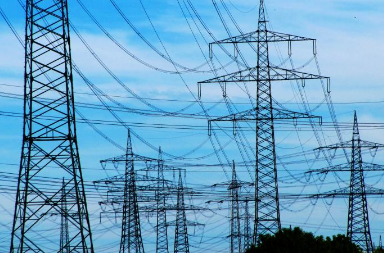 PANJIM: In an attempt to defend the proposed Goa Tanmar Power Transmission Project, passing through the protected areas of Mollem forest, the State government on Tuesday released a White Paper on power consumption revealing that Goa’s power demand has seen an average increase of 5 per cent annually in the last decade. The government also assured that it has no intention to set up a power generating plant or to convert Goa into a coal hub.

The Goa Tanmar Power Transmission project, which is being opposed strongly, involves the construction of a 220kv sub-station at Mollem and laying of 400kv power transmission lines over multiple stretches of about 240 kilometres. The controversy is that the major part of the project cuts through the Mollem National Park and involves felling of several thousand trees.

Addressing media persons, Power Minister Nilesh Cabral released the White Paper on the State’s power consumption in the last ten years since 2010-11. As per the document, domestic power demand witnessed an average 4 to 6 per cent increase, as against the industrial need of 2 to 4 per cent. “On an average, every year, around 4 per cent new domestic consumers get added, whereas the industrial consumers stood at one per cent only,” he said.

“I am saying to clarify the tall claims made by the opponents or protestors, opposing the transmission line in Mollem, claiming that it is to benefit the industrial sector. As per the data, domestic consumers consume more than 60 per cent of the total load that Goa requires,” he said.

Stating that it will take at least three years to complete the proposed transmission line, the Minister said that this infrastructure is the need of the hour, failing which the State will be hit hard in coming years over power requirement.

“Some 10-15 people, NGOs along with opposition parties, are protesting and opposing the project. If they can prove why they are opposing, then the government will call off the project. But there has to be proper justification. Goa has 15 lakh people,” he said.

Cabral said that 110kv and 220kv transmission line is already running through the same Mollem protected area, and was laid in 1976 and 1992. “Why did people did not oppose at that time? Even to lay those lines, trees were cut,” he said, adding 2600 trees which are cut for the current project are outside the wildlife sanctuary in private area.

He said the State has 54 sub-stations and to set up all those, trees have been cut.

The Minister said the government has no plans to set up a power generating plant in the State. “Also, there will be no coal hub or burning of thermal coal. Neither, will we have any stop of loading or unloading of coal at jetties, for transportation to any other States,” he said, urging people to “have faith and believe in the government”.

Further, extending support to the double-tracking of the South Western Railway line, Cabral revealed that they will release a detailed presentation along with documentation on the project, which is part of the Sagarmala project – a Central sponsored project. 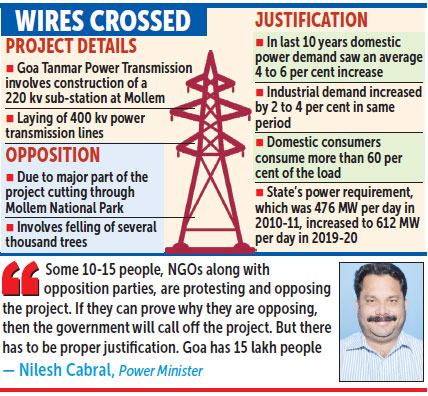